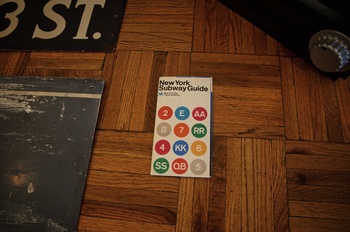 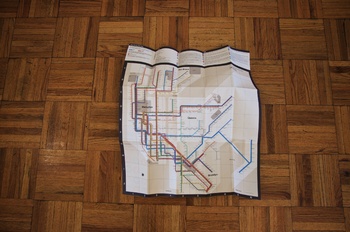 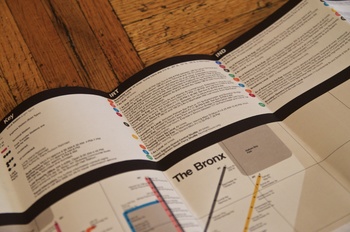 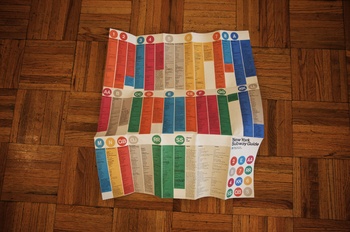 This is a first edition printing of Massimo Vignelli's controversial New York City subway map. It was initially met with anger from confused commuters who didn't take particularly well to its major stylistic liberties, like its nearly-square rendition of Central Park or its angular and rounded representations of the city's coastlines. It lasted about seven years until the 1979 design (still used today) replaced it. The new map was more geographically accurate, but the style and glamor of Vignelli's design was gone.

Vignelli's map was printed in a few editions: 1972, 1972 (2), 1974, 1976, 1977, and 1978. The 1972 maps were the closest to his specifications, as they were set in Helvetica type and used the individual Pantone colors chosen for each line. 1974 and later maps used tints rather than individual colors and lost the Helvetica font. Of the 1972 maps, four versions existed: the original 1972 copy with the colorful 'bullet cover' of each subway service, the second 1972 copy with a blown-up map rather than the lines page, and a revised 1972 (2) copy with a "K" train rather than a "KK" train that was printed in both bullet-cover and map-cover form. This is the original copy, matching the one displayed in the MoMa.

I keep it under plastic and rarely open it, but I opened it up for these pictures. The folds are extremely crisp and the map will not lie flat, and I certainly wasn't going to force it! The colors of the back cover are particularly striking to look at, and if I had two copies of these I'd love to have one framed by the front and another by the back.