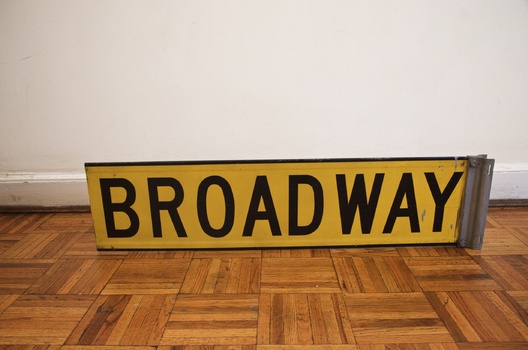 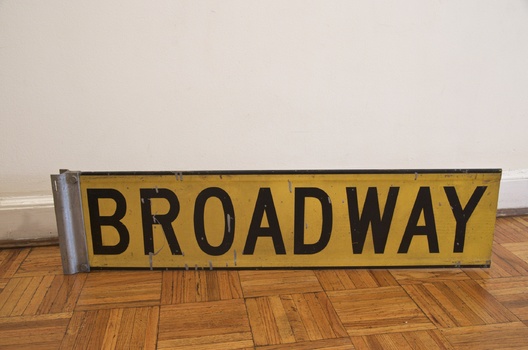 This is a sign that could have been posted any time from 1964 through the later 1970s for New York's legendary "Broadway." It likely dates from 1964 or the years just following, however, as the city worked hard to unify the sign system in the years that these signs were introduced, and most were posted around that time.

The sign is black text on a reflective yellow paint, which matches the city's borough-specific color code during the time (black on yellow for Manhattan and Staten Island, white on black for Brooklyn, blue on white for Queens, and white on blue for the Bronx). These signs appear in any period-specific film (Taxi Driver comes to mind) and were a staple of the city until the mid-1980s when federal regulations required all street signs (with a few exceptions) to be changed to white text on a green background. Even those signs are becoming numbered now, as a new federal regulation requires a switch from the all-capital Highway Gothic font (seen here) to lowercase Clearview lettering. For me, this sign comes from the peak of the city's sign design, and it's been increasingly downhill since.

One side is cleaner than the other here, but each are in fairly good condition. The original mounting bracket is still attached to this sign, which measures about three feet long. Silver paint splotches are from the painting of the light pole this sign was attached to for the decades it was in service.