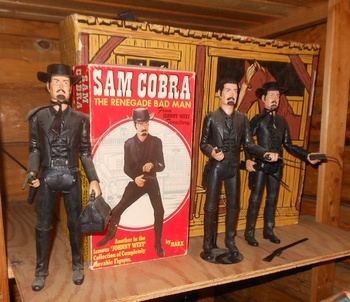 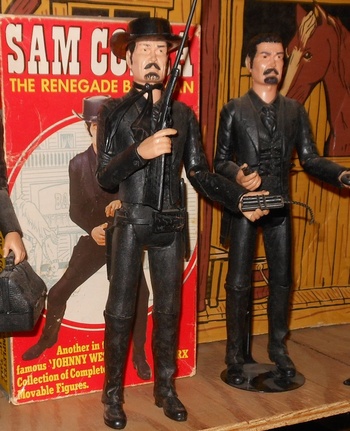 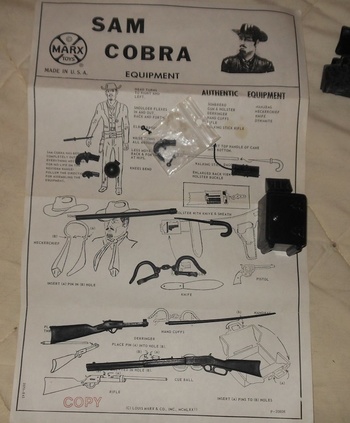 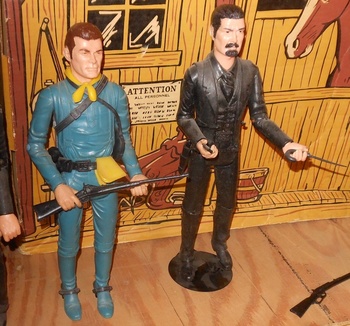 In the early 1970s Louis Marx sold his company to Quaker Oats. In 1973 Quaker Oats Marx came up with new character Sam Cobra the Renegade Bad Man. Originally the pieces from this set were meant for James West figure from the Wild Wild West TV show. Thus the accessories were designed for an 1870s era secret agent. There is a rifle with a barrel from a pool cue, a tiny take down derringer that went inside a cue ball, a stiletto that fit inside a sleeve, there is also a derringer built into the belt buckle. The original pistol belt was made from hard plastic and is very fragile. I think I have an intact belt somewhere but only one figure has the original belt seen here. Along with the pistol hoster and derringer it has a scabbard for a throwing dagger.
There is also a safe, carpet bag, sword cane, dynamite, hand cuffs and a few other pieces.
In the last photo is Captain Maddox who had the Robert Conrad head sculpt. After the deal fell through for the Wild Wild West line Robert Conrad became Captain Maddox in 1968.