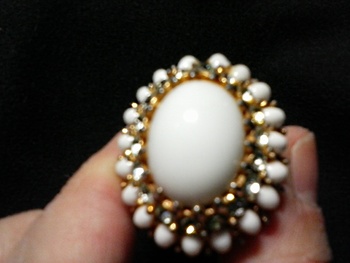 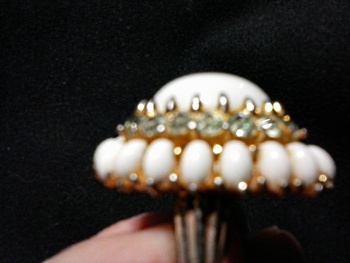 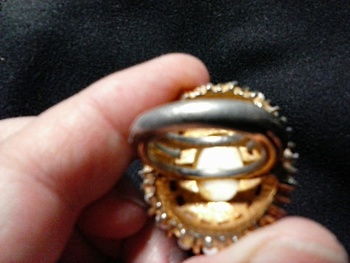 My second find today was this large white glass and rhinestone cocktail ring by Joseph Mazur. It's marked "JOMAZ" on the back which puts it in the 60's 70's era. The band is pretty worn with much of the plating gone but the stones and glass are all intact. Quite an eye catcher ! -Mike-

Mazer Brothers was founded by Joseph Mazer and his brother Louis in 1926 in New York. One of Mazer Bros. best known designers was the talented Marcel Boucher who left to open his own company in the mid 1930s. In 1946 Joseph Mazer left Mazer Bros. to form Joseph J. Mazer and Co., better known as JOMAZ, while Louis Mazer stayed with Mazer Bros. until 1951, the year of his last jewelry collection.

Mazer Bros. was known for its innovative stance, exploring new design and production methods and continually experimenting with different techniques for creating metal alloys or for use in the refinishing processes. The stones used in their jewelry were frequently made to order by Swarovski in Austria. ( 1 ) p. 216.
The early 1950s jewelry was designed by Andre Fleuridas, and Adolfo designed some of the 1970s pieces for the company.
The company went out of business in the late 1970s. MAZER manufactured high quality jewelry which sold at middle price range and is avidly sought in the collectible market today.
Earlier jewelry is marked MAZER BROS. while later pieces are marked MAZER or JOMAZ.
Signatures:
MAZER BROS. - 1926 to 1951
JOMAZ - 1944 to 1981
MAZER - used by Joseph Mazer from 1946 to 1981