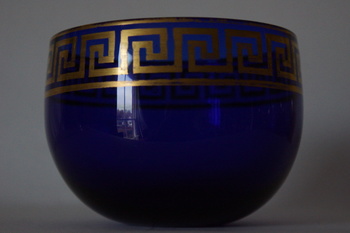 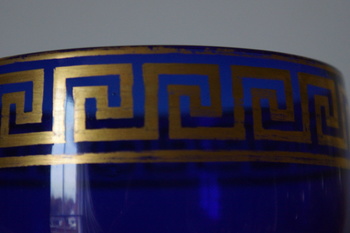 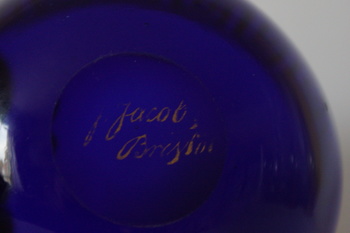 This is a Bristol Blue finger bowl with a Greek key pattern frieze under the rim. It is signed I. Jacobs Bristol and made circa.1800-10.

Every now and then a real piece of history pops up on eBay, and sometimes I am there to try and get it. I couldn't believe it when this came up on eBay and then couldn't believe it when I won it. This fantastic museum piece belongs to me. Isaac Jacobs was the first person in UK to sign his glass and the first in England where you have a guaranteed provenance. Everything about this piece is right, the quality (or lack of) of the glass, the gilding technique, the wear, the signature, it's all good.

Here is some history to go with it:
Whilst Bristol had a tradition of glass manufacturing, blue glass from the South West of England started to be made during the mid to late 18th century, when cobalt oxide or 'smalt' was imported from Saxony in Germany. Smalt imports were limited to the port of Bristol, originally for producing blue on white porcelain but the glass makers of Bristol also had access to the smalt which could be mixed with lead glass to make the distinctive blue glass, which has become synonymous with Bristol. In time, the smalt was sold to other glass manufacturers around the country but as they had to buy it from Bristol, this further established the term, 'Bristol Blue'.

The Jacobs glass business was originally started by Isaac's father, Lazarus Jacobs, who originally started by selling second quality glass and bankruptcy stock, but was able to expand his business, principally in glass cutting and engraving where he was assisted by his son, Isaac. The Jacobs business expanded to manufacturing in 1774 and the family business soon became experts in the use of cobalt oxide to produce the rich blue glass, which quickly became popular with wealthy and royal patrons. Whilst blue glass was produced in the other major glass manufacturing centres such as Stourbridge and Newcastle, the pieces from Jacobs were uniquely signed, making them extremely collectable.

Isaac Jacobs took over the business from his father and opened the Nonsuch Glass Manufactory in 1805, but a number of bad business decisions combined with increased competition, particularly from Ireland led to financial distress and ultimately bankruptcy.