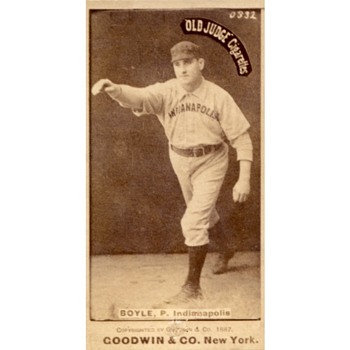 My baseball cards are few and mainly presents from one of my sons. This 1887 Goodwin & Co. Old Judge card is from our visit to a National Sports Card convention years back.

Baseball is a sport with a rich and colorful history. Players immortalized in little pieces of vintage cardboard, issued during baseball’s earliest years, give wonderful insights into the sport’s lore and legacy. In my opinion, really early cards are much more interesting than their flashy contemporary counterparts. And keeping with my interest of pre-1900 photography, Goodwin’s Old Judge N172 set are issued as true photographic cards.

Goodwin was the first company to create full sets of trading cards portraying baseball players. The concept of tobacco card advertising goes back to 1879 when cardboard inserts were added to cigarettes packs. Companies quickly realized these blank stiffeners could be small canvases for advertising and by 1888 nearly all companies were including them.

Photographic cards appeared sometime in the 1886 to 1887 timeframe. All Goodwin Old Judge photographic baseball cards are catalogued as N172. The production approach was interesting and predominantly photographic. It started with arranging 24 cropped cabinet photos into a 4 x 6 array covered by a matte. Player information was added to each image and the entire setup was re-photographed as a relatively large imperial format image. This single 24-image photograph was then mounted to a sheet of cardboard and cut apart.

Goodwin's Old Judge baseball cards are not rare and often found for reasonable prices. As with any collectable, star players' cards will have the highest value. The card shown here is Henry “Handsome” Boyle who was a pitcher for Indianapolis (NL) at the time of this issue. Goodwin made four different poses of Boyle. While Boyle was a rather average pitcher by most measures, he and hundreds of other early players are remembered because someone (unknown to this day) proposed the idea of producing photographic cards to Goodwin & Co. And these sepia colored images of players in rigid poses give us a feel of the simpler pleasures of a sport in its infancy.