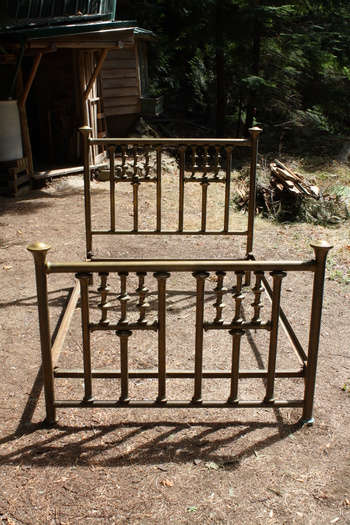 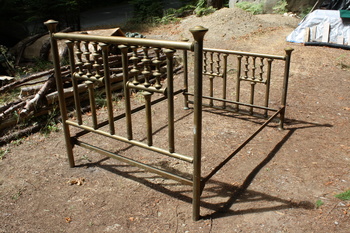 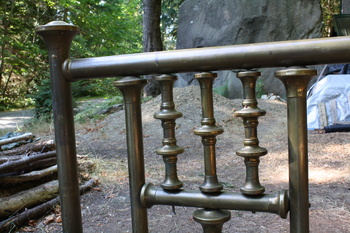 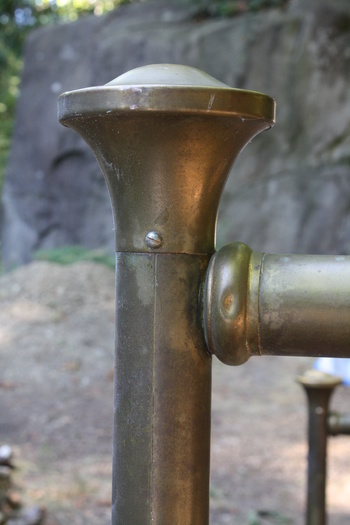 This is an early 1900s full-size (or double) Simmons solid brass (over iron) bed originating in Montreal, Canada. It compliments the brass bed I previously acquired in January earlier this year (see previous posting).

I paid $35 for it at a local yard sale this summer and the seller was apologetic about the price, implying I could offer less for it if I wanted. It belonged to his wife and they were downsizing to their new smaller cottage-house. He hated brass beds and couldn't understand why anybody would want one; he was suggesting it might be re-purposed as a funky garden gate or something. As a crowd of potential interested buyers began to buzz around I quickly paid the asking price before being bombarded with offers up to four times as much while loading it into my vehicle!

The bed was manufactured in Montreal and sold in Quebec. There were only two owners (prior to myself) and it was gradually moved across Canada to the west coast over the years. It's in excellent condition, just needing a cleaning, light polish, and mattress/boxspring before being put back into use. I'm in a quandary because I prefer the style of the previous brass bed I purchased but that one needs a lot of repair and this bed can be used much sooner. Also I don't have the room for two beds!

I will likely use this bed as a "placeholder" while I repair the other one. I suppose then I'll have to build an addition on the house to make room for both of them! After spending so much time searching for an authentic brass bed I never thought I'd be in the enviable position of choosing between two of them!