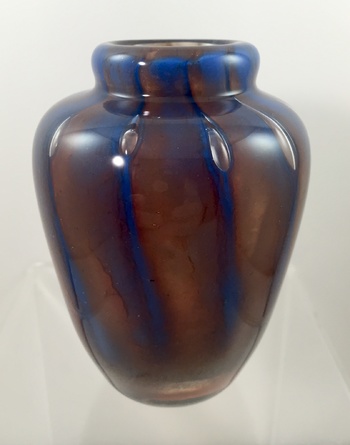 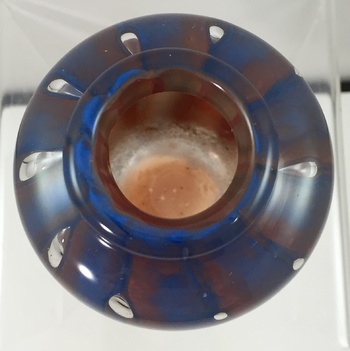 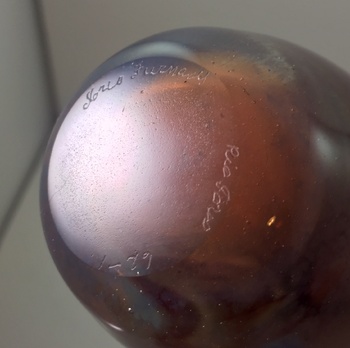 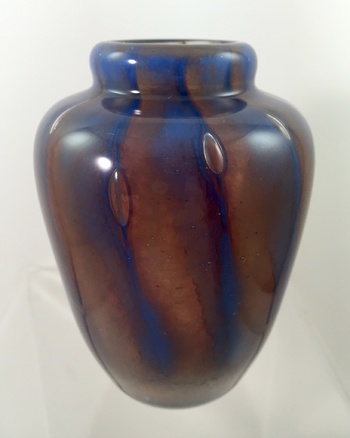 There is not a lot of information available about this talented glass artist online, but here is what I found so far:

Ric Iorio's grandfather, Louis, was a stone wheel glass cutter who worked for Empire Glass until they closed in 1920. In lieu of his final payment, he was given the tools he worked with and continued to cut glass under the Iorio name until his death in 1981 at the age of 99. Louis's son, William, also was a glass cutter who branched out into colorful buttons and paperweights. William's son, Ric, after getting an degree in anthropology, returned to the family business in Flemington, New Jersey, and in about 1973 or 1974 set up "Iorio Furnaces" with his father. They built their own furnaces and even made many of their own bricks. Ric's glass was all hand made from raw materials and mouth blown. He is probably more well known for his fairy lamps, but online searches have turned up vases and paperweights, usually internally decorated in thick crystal.

The example here is made in layers of crystal and pink, injected with streaks of deep blue and a ring of controlled bubbles around the shoulder of the vase. The rim is fire-polished and the base is ground flat and polished. It is signed "Iorio Furnaces" along with the signature "Ric Iorio" and numbered 62-1. The significance of the number is not known - it's too early for a date, given the reported date of the establishment of the furnaces (although the family business dates back well before 1950). I estimate that this vase dates to the mid-1970s. It stands about 4" tall and has a nice hefty weight to it.

I generally only buy what I know, but this was one case where I saw a piece, just really liked it, and decided get it for no other reason. I would like to find out a little more about this artist, though - some of the pieces I've seen on line are really very nicely done.

Much of the information in this article was found on the website of the Fairy Lamp Club. 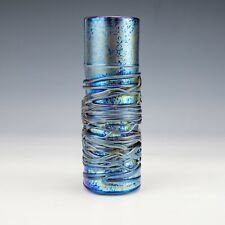 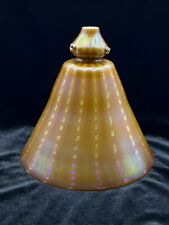