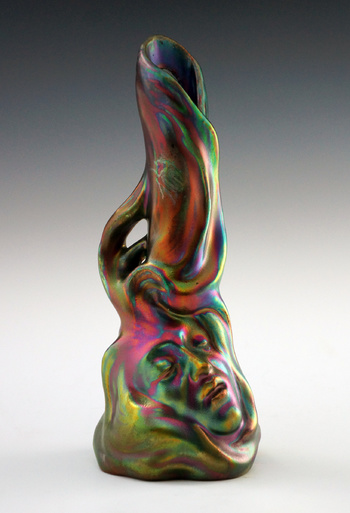 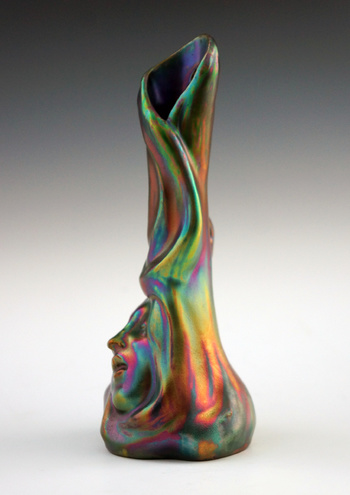 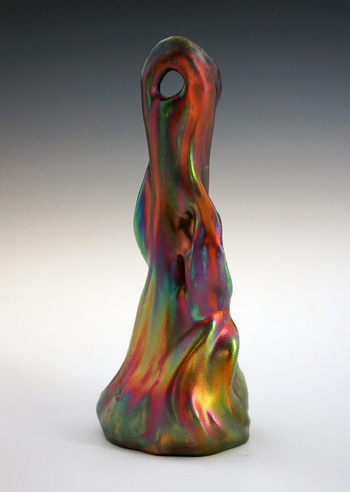 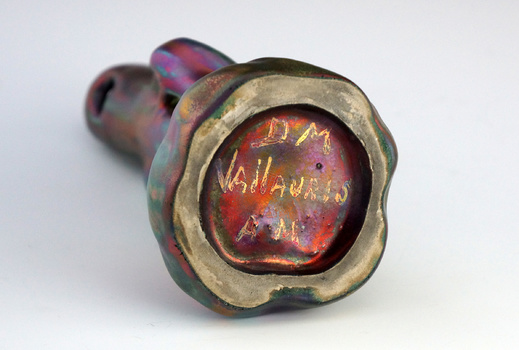 Clement Massier, largely with the assistance of Levy-Durhmer, is often credited with introducing Symbolist movement motifs to Art Nouveau pottery, but it was his older brother Delphin Massier who often would take those Symbolist motifs and forms and turn up the aesthetic to eleven. This electrically iridescent vase, of which I know of three examples, is particularly interesting for the addition of painted insects on the vase neck and back, which adds to the mystery and allure of the piece. Delphin was arguably better than Clement in bringing out strong iridescence in his pieces, which can clearly be seen here. The intense colors and shine would gives the impression this piece is constructed of carnival glass, not luster glazed stoneware. Dimensions: 9” (height) x 3.25” (base width).

The form, which can be viewed as either ominous or ascendant, in combination with the addition of insects, make me wonder if the studio artist who worked on it was acutely aware of Baudelaire's "Hymn to Beauty."

Did you spring out of heaven or the abyss,
Beauty? Your gaze infernal, yet divine,
Spreads infamy and glory, grief and bliss,
And therefore you can be compared to wine.

Your eyes contain both sunset and aurora:
You give off scents, like evenings storm-deflowered:
Your kisses are a philtre: an amphora
Your mouth, that cows the brave, and spurs the coward.

Climb you from gulfs, or from the stars descend?
Fate, like a fawning hound, to heel you've brought;
You scatter joy and ruin without end,
Ruling all things, yet answering for naught.

You trample men to death, and mock their clamour.
Amongst your gauds pale Horror gleams and glances,
And Murder, not the least of them in glamour,
On your proud belly amorously dances.

The dazzled insect seeks your candle-rays,
Crackles, and burns, and seems to bless his doom.
The groom bent o'er his bride as in a daze,
Seems, like a dying man, to stroke his tomb.

What matter if from hell or heaven born,
Tremendous monster, terrible to view?
Your eyes and smile reveal to me, like morn,
The Infinite I love but never knew.

From God or Fiend? Siren or Sylph ? Invidious
The answer — Fay with eyes of velvet, ray,
Rhythm, and perfume! — if you make less hideous
Our universe, less tedious leave our day.