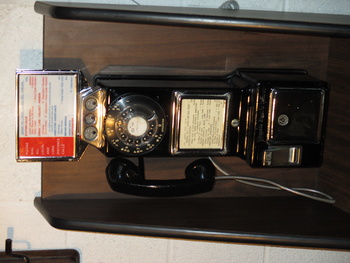 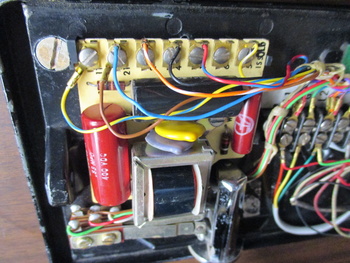 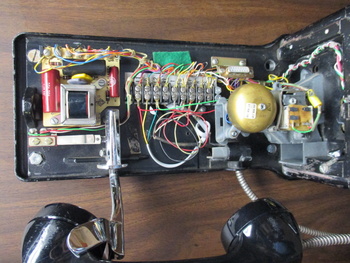 I recently got my second AE payphone up and operating. Was going to be my "winter" project....but once I got going I wanted to finish it! When I purchased this 1960's era phone off Craig's List, the seller and I decided $40.00 was a fair price. Couldn't get the money out fast enough! However, it was a gut out project. Old blue circuit board was missing componets. Came with the brown booth so that was a BIG plus.
I replaced the circuit board and all the wires with a NOS AE complete wire harness with board. Thought it would be a fast install but no. Turns out I had to get on computer and do some research to find out what wires went to what terminal. All the circuit board wires had to be switched around, the 1~7 dial terminal strip wires needed to be searched out to where each went. So nice when I picked up handset and heard a dial tone! Then tried to dial out and it worked! Then called to payphone and rang! (after I installed a bell) Both locks with keys were added, vault door, coin box, armord handset cord, bell, line cord, finger stop, top flag instruction sign with 1974 card, were all added by me to make this phone complete.
*I updated the photos to how it looks now.
Sent from my iPad