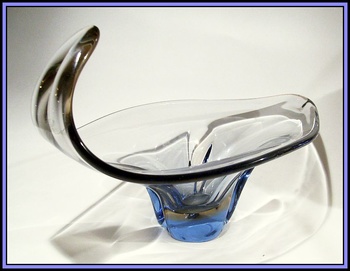 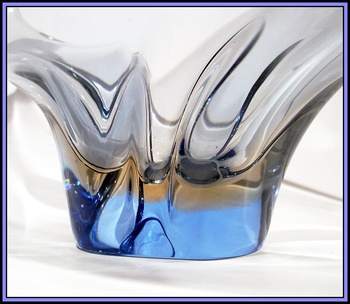 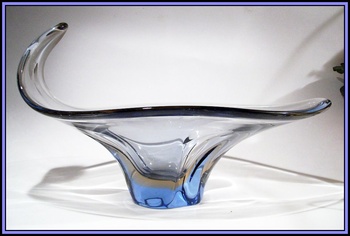 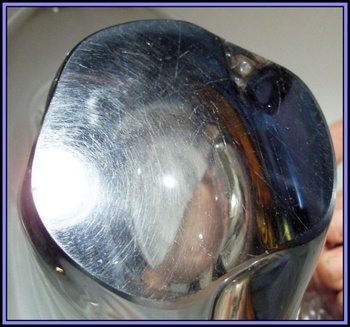 Circa 1962 - SKRDLOVICE Art Glass = Pattern number # 6207. I think Very interesting Piece of glass and large. It has very good age related wear on the bottom, The bottom edges are chafed. Quite large at:

What the interesting part of the story here is from that *Robert Bevan- Jones* who is one of the authors of the Book " Beranek & Skrdlovice Legends of Czech Glass by Robert Bevan- Jones and Jindrich Parik." Robert pointed out to me that YES, this is a Piece of SKRDLOVICE glass -- that was instrumental by the Business Man EARL MYERS with the Skrdlovice Glass company. But also Mr. Myers was a Business man that started the LORRAINE ART GLASS COMPANY in Canada later on.

That is SO interesting as with that Curl on the end, I can kinda see some Canadian Art Glass (properties) seen in both Chalet Art Glass and Lorraine Art Glass. Yet it is SKRDLOVICE.

So I think that is such neat info....as in a Sense, related via a Business Man EARL MYERS doing buisness with Skrdlovice ( Czech) and starting Lorraine Art Glass ( in Canada)

As per VETRAIO50 on CW, WHOM also ID THIS BOWL AND PROVIDED SEVERAL LINKS AND RESEARCH, THANK U :

""One of the men who ran this company, Earl Myers, later founded Lorraine Glass Industries in Montreal, Canada and also contracted Skrdlovice (via Glassexport) to produce some designs for him from c.1962 - 63.""

THANKS FOR THE INFO ROBERT!!
[QUOTED]

"..... pointed me towards the then new book by Deborah Patterson on Canadian Glass

I also had some other unpublished information relating to Lorraine and Mr Earl Myers which was not easily referenced. The text I originally prepared had full footnotes etc.. citing all sources, though this would have probably made the book less reader friendly. During the study, I was pleased to hear of any information, I had even contacted the well known Blenko designer/glassmaker Joel Myers in an effort to learn about Earl. This was because an exhibition had inaccurately advertised Joel as a Skrdlovice designer.... Joel confirmed that he was not and had never been, though he had been invited to and took part in a glass Symposium in the then Czechoslovakia. He was very helpful.

I recall that there is some information in the Deborah Patterson book about Mr Myers. I hesitated to say Earl Myers was a designer directly as it appeared to me, from what I had read/been told that he was a busy businessman rather than an artist and it was likely that the pattern book referred to his name, as the name of the person commissioning of designs to be produced, not that actually he designed them, as that would be a bit strong without more evidence. From what I had learnt, he was probably primarily a businessman who employed glass workers and artists to create a profitable industry. This indicates that Myers made these designs happen, by his efforts, but did not necessarily draw the shapes himself. The quoted line allows this "contracted to be produced" does not exactly state "designed by". Amazing that a Canadian could get into the country at all at this time and make a business arrangement, he must have been determined!
[END OF QUOTE]