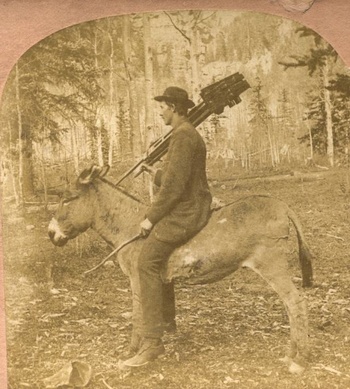 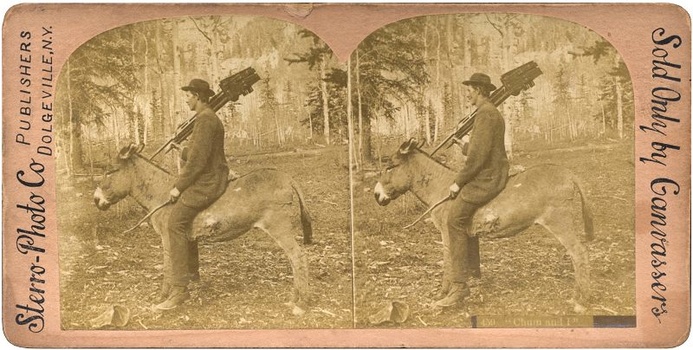 Images of photographers and their cameras are interesting additions to my collection. Many pictures typically show stoic looking practitioners standing proudly next to their beloved cameras. I have several examples posted here on CW. But every once in a while an unconventional image - much less a stereoview - appears. This particular stereoview of a photographer on a donkey holding a wooden field stereo camera is definitely unusual and brings a smile every time I look at it.

This stereoview is also an example of a very inexpensive production method. The original image was re-photographed with title information and then a single picture of the stereo pair was mounted on cardboard. This is the same way 1880s Goodwin Old Judge photographic baseball cards were produced and sold. (Another CW post of mine describes the production process in detail.)

I think the original image could be older than the Sterro-Photo Co. publication. A careful look at the camera shows glints of brass bindings on the standards and other distinctive design details. The camera appears to be a wetplate “view-box” made by the American Optical Company that was available from the 1870s to mid-1880s. Then again, the original image could be 1890s and the photographer kept the older camera.

This stereoview was also believed to be a portrait of the photographer C.L. Pond in Yosemite. At this time, I’ve been unable to find proof of this attribution and consider it an anonymous person.

Ohhh ... and it’s been a couple years since I put forth a caption contest challenge, and this picture definitely deserves witty commentary. So let your imaginations go crazy and have at it ... again ... it’s not a contest per se and the most enlightening / funny captions will be rewarded with recognition by your peers!