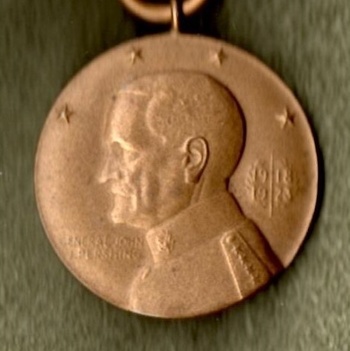 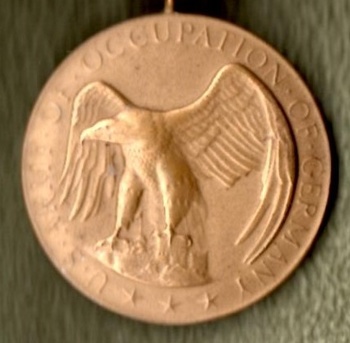 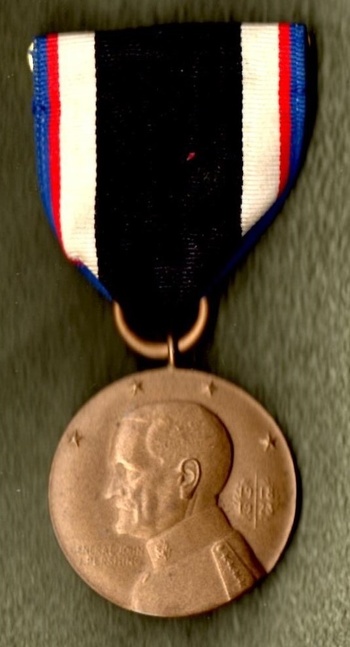 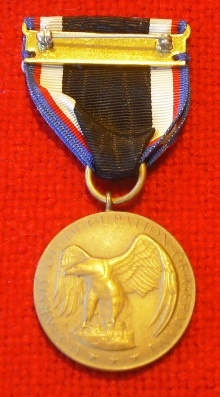 This medal was awarded to U.S. Military personnel who served with occupation forces in Germany and Austria after WWI, between 12 November 1918 and 11 July 1923. Like the medals in last week’s post, this medal was authorized much later - 18 years after the event. Intended to honor both WWI veterans and General Pershing, it was created during a time when Germany was at war again and diplomatic relations were unraveling. It was established in 21 November 1941, only three weeks before the bombing of Pearl Harbor.

The pin or “brooch” on this medal is of a type used in the 1940s. I photographed this picture rather than scanning it like the ones with green background so I could get a good shot of it lying flat. This is the second version ribbon. The first version had a wavy blue edge to symbolize the Rhine River, but it was changed to simplify manufacture.

The medal bears the likeness of General of the Armies John J. Pershing. “General of the Armies” was a new rank without a specified insignia. Instead of adding a fifth star, Pershing chose to change his four silver general’s stars to four gold stars. This is why he wears four stars on his shoulder and there are four stars above him on the medal. It’s strange to me that his likeness would be chosen as he was still alive at the time and traditionally we don’t do that on our money or stamps. To the left is the name “General John J. Pershing” in two lines. To the right is a laurel wreath with unsheathed sword and the dates 1918 and 1923.

The back has an eagle perched on Castle Ehrenbreitstein. The castle covered the Rhine River in WWI and served as US Army headquarters during the occupation.