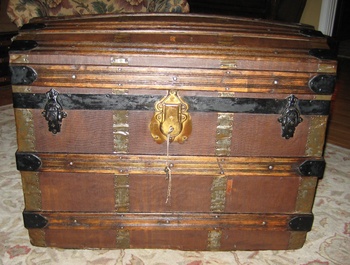 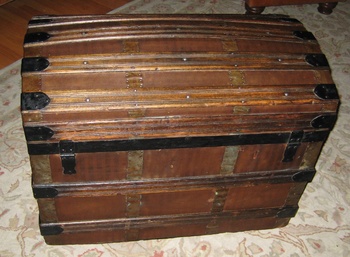 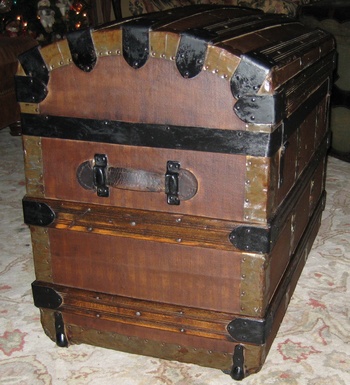 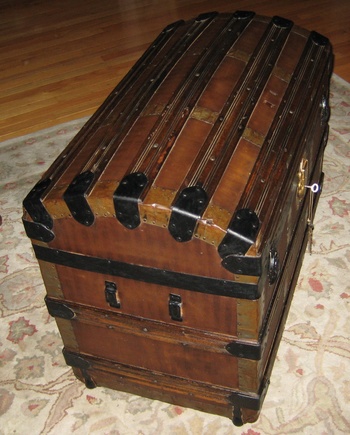 Just finished cleaning this canvas covered dome top trunk. It was a rescue trunk. It came very close to ending up in the wood pile. I hated to see it thrown away, so I took it home and gave it really good cleaning and polished it up. It was extremely dirty on the outside and probably one of the worst I've had in my possession in a while. The hardware had severe surface rust, but still cleaned up well.

It has a striped canvas covering, which is something you don't see often. Though the stripes have severely faded away, they still seem to show up. It's still a really strong and sturdy trunk. The hardware is much plainer than some that I have, but still not bad looking.

I was glad to see the canvas in such good condition as I was hoping to be able to salvage it, which is what I did. It's missing a leather handle, but still has one really strong leather handle intact. I found a couple of keys that work the lock. A little gun oil inside the lock and we were back in business again.

I haven't began to tackle the interior yet. It's missing it's tray, but still has it's lid compartment and two really nice lithographs inside the lid.

Thanks for stopping by and looking!!!