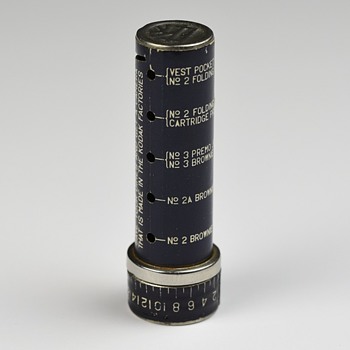 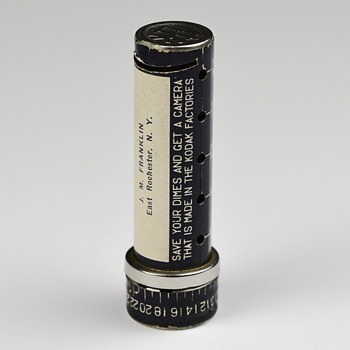 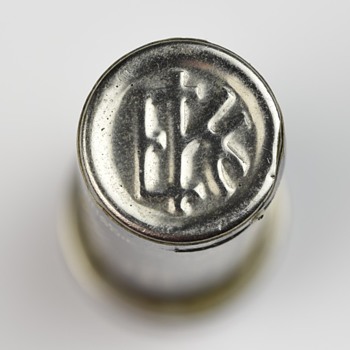 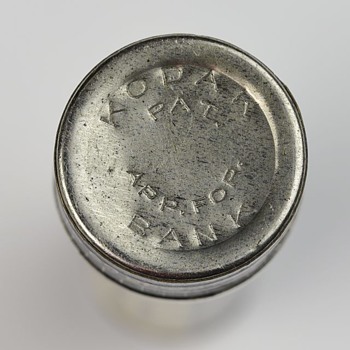 My oldest son recently found this and thought it was pretty cool. And it is! I’ve never seen or heard of a Kodak Dime Bank. The deep blue paper label shows it was made by the Eastman Kodak Co., Rochester NY. This tiny bank is unused and in excellent condition. Given that it was probably for kids, teens and possibly adults, it’s amazing any survived let alone not broken open.

Kodak’s promotion was ingenious and simple:

“Save your dimes and get a camera that is made in the Kodak factories.”

Eager fingers would insert dimes in a slit at the top of the bank. The growing stack of dimes eventually appeared in a small hole for a particular camera. The more dimes saved, the better the camera.

When the ‘goal’ was reached, the dime bank was brought into a participating bank and opened by the person whose name appears on it.

Keeping track of dimes was possible by turning a paper indexed dial at bottom of the bank. The well known deco styled Eastman Kodak Company logo (interleaved EKC letters) appears on the top and a “Kodak Bank - Pat. App. For.” is impressed into the bottom.

None of my Kodak ephemera mentions a still bank or this promotion, but I was able to estimate a date by looking up catalog entries for each of the listed cameras; ranging in price from $3.00 to $5.00. All cameras were available for a couple decades but two in particular helped nail down possible promotion years. The No.2 Folding Brownie was discontinued in 1915 and the No.2 Folding Cartridge Premo was introduced in 1916. Both cameras were listed at $5.00.

In reviewing the 1915 and 1916 catalogues in detail, the years of 1915 and 1916 might have been chosen for the promotion because it was the same year Kodak introduced ‘autographic’ photography ... but that’s another story.