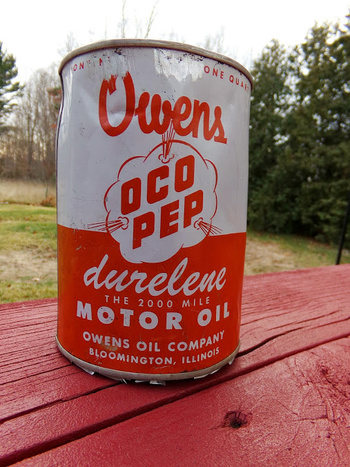 Feeling restless, I took a walk in the general direction of a State Park over here in Michigan, but before I got there I hit up an area of woods I'd dug in last year (no shovel this time, so all searches remained on surface.)
Near an abandoned house's remains, I had last year dug the can but thought it pretty modern as it's aluminium. So I left it near an ancient-looking tree.
I decided to keep it this time, having re-found it, and later discovered that this company changed their logo in 1960. This is their 1953 (if I recall) to 1960 logo.
Good thing I this time listened to my friend Leon, who told me to bring back all cans.

Ideas on exact age and commonality? I saw only one other orange one (in research) with this logo, so I assume it's closer to 1960 but not as common?