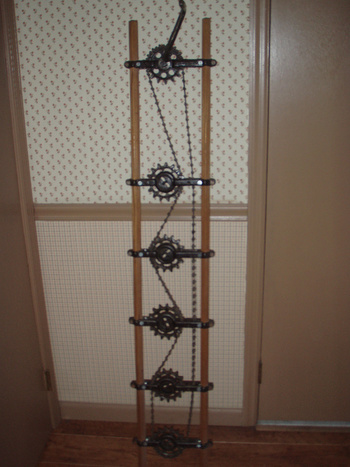 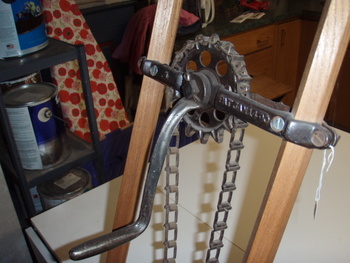 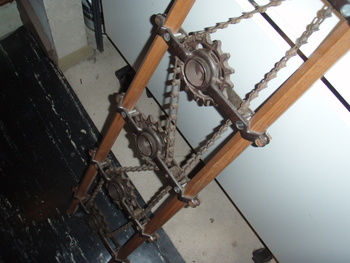 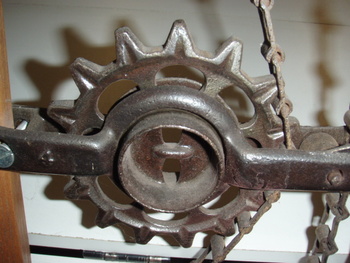 This is a fence making tool that was used to make fences to contain small animals like chickens or ducks. It used (8) eight spools of wire that were weaved through the (2) two small holes in each of the lower (4) four sprockets, like the sprocket seen in the last picture
These wires were than tied to a sturdy post and the tool was slid close to the post. You begin by making (3) three counterclockwise rotations of the handled top sprocket. Then you would place a picket or sapling down and between the two wires in the (4) four lower sprockets. You than make (3) three clockwise rotations of the handled top sprocket. Doing this would pinch the first picket close to the first set of counterclockwise twists. You then make (3) three clockwise twists of the handle. By going clockwise this time, you took the twist out of the spools . You then placed another sapling or picket in place, and repeat the (3) three counter clockwise twists resulting in pinching the pickets and starting a fence of pickets. This repeated counter clockwise twists and clockwise twists with pickets in between created a sturdy fence that was suitable to keep your small homestead animals contained.
It leaves you with a fence similar to the ones that were often used along the northern states roads. The purpose of those fences were to keep the snow from drifting onto the roadway. They used to call it snow fencing. I haven't seen it used in years here in Pennsylvania, probably due to the cost of putting the fence up each fall and down each spring.
Anyway, if you've seen snow fencing along the rural roads, you get an idea as to how this fencing is woven onto a pickets fence.