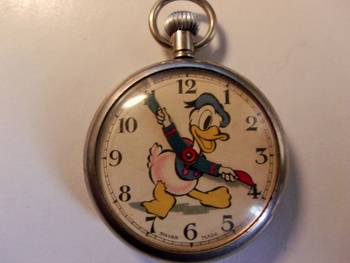 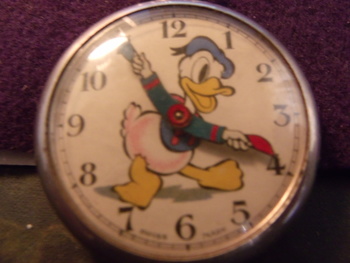 More for the Quack Pack. This is probably the oldest Donald Duck pocket watches produced. Ingersoll had the Disney contract to produce watch exclusively from 1933, but that didn't stop these from being produced. These were Swiss made for an English sale firm back in 1937, two years before Ingersoll produced their first issue of a Donald Duck pocket watch, note the red and blue flags in Donald's hands. This distinguish them from a later model know as the "Ward" Donald(circa 1953), which have a blue & yellow flags. Fellow CW patron geo26e has the wristwatch posted on forum already.
Thanks for looking,
Kerry