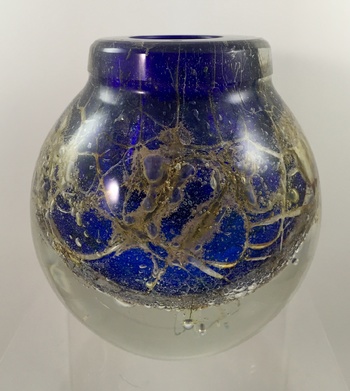 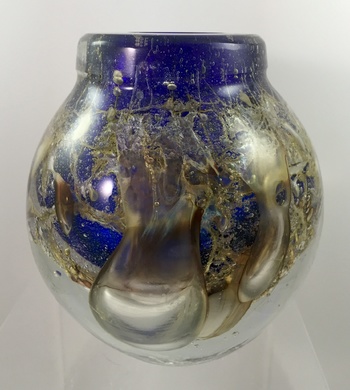 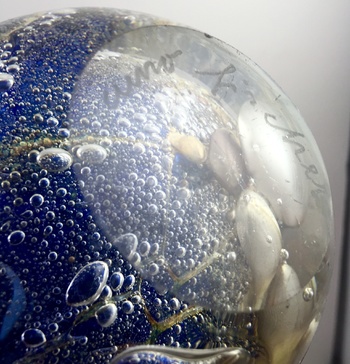 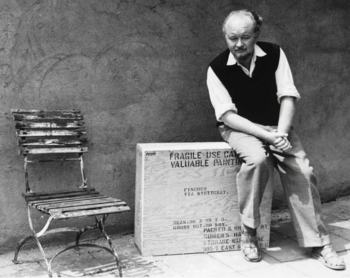 The story of Cuno Fischer (1914-1973) is an interesting one. From 1932 to 1935 he studied graphics, set design, and painting at the School of Applied Arts in Wuppertal. Meanwhile, some of the ways he earned his living were at the Salvation Army, as a circus clown, and as a bar pianist.

After the Nazis seized power in Germany, he was arrested and detained briefly for allegedly insulting Gauleiter and Reich Minister Joseph Goebbels. He was released under police supervision and not allowed to work for a time.

From 1945 to 1950 he worked as a set designer in Berlin. In addition, he founded and led the Berlin cultural collective. In 1950, he moved to Stuttgart, where he published art reviews, feature articles and essays.

In 1953 he became a member of a southern French gypsy clan and spent much time in Saintes-Maries-de-la-Mer (Camargue). In September 1963, he moved his family into a studio and home of his own design in Murnau.

Perhaps he is most well-known for his designs for relief bowls and vases for Rosenthal's Studio-line range between the years 1961 through 1972. He also designed similar pieces for Hutschenreuther. These pieces are sought after and are readily found on the market, and include a stamp of his signature on the base.

He also took an interest in glass in the early 1960s, after encountering "Adventure Glass" - a line of unique art glass pieces produced by the Gral Glass Works in Dürnau under the direction of Karl Wiedmann of WMF fame (best known for his invention of "Myra" and "Ikora" kristall). As a side note, after WWII, the Gral glass factory in Dürnau was almost entirely staffed by ethnic Germans expelled from Eleonorenhain in Bohemia. A contemporary account quotes Fischer regarding his new interest in glass as a design medium:

"Never has an artistic task held as much fascination for me as hands-free glass blowing. You never know what will come out when you open the lehr. How will the vessel that had been imagined, now look? Or perhaps it will be shattered, because it could not stand the stress upon cooling? Glass is a particularly compelling and unpredictable material to work with. But for an artist, a wonderful adventure."

Cuno Fischer designed unique, one-off pieces like this one, as well as more utilitarian pieces for the company's regular production line, but he only did so for about four years, from 1963 to 1967. To find a hand-signed "Unikat" piece designed by Fischer is to me an incredible rarity with an associated history as colorful as the glass. Cuno Fischer died in Bavaria in 1973 and is buried near his home in Murnau.