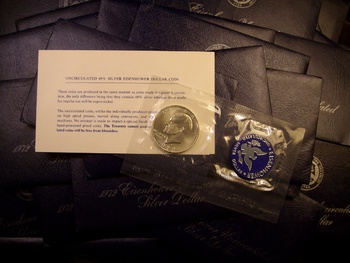 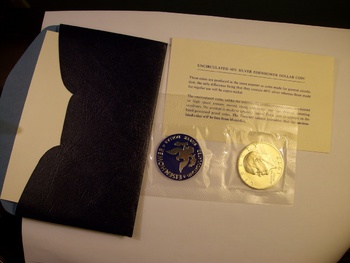 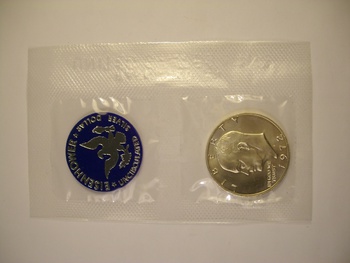 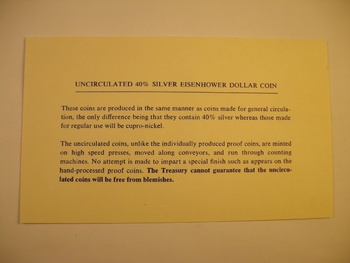 I recently (about 3 months ago) made a trade for 120 of these 40% pure silver Eisenhower dollars that were minted in 1972 at the San Francisco mint. They are know in the coin collecting community as "Blue Ikes" because of their blue U.S. Mint packaging. If they were to be pulled out of their protective cellophane sleeves (which I wouldn't do) and were put into 20 coin rolls, each one of the six rolls would contain just shy of 7 ounces of pure silver (exactly 6.95 ounces). The vast majority of these almost 40 year old coins have either been broken out of their original govt. packaging and melted during the mass silver melts that have happened back in 1979-80 and of course those that have been going on the last year or two or three, or they have been sent off to the several "third party graders" to be slabbed and graded. Having them in their original format with all the paperwork, along with the blue envelopes, is a rare bird indeed. Having 120 of these, pristine perfect, in their original "blue packs", is something that very few people have in this size quantity. They are bringing a huge premium today for not only their pure silver content, but for their packaging as well. I think I'll leave them just like they are and salt them away with the rest of my silver coins and bullion. This is the type of investment that one can not go wrong on. Again as I have said many times, buy all the silver, even at today's prices that you can afford. It's still, believe it or not, a great bargain and one you'll be very glad one day, that you took advantage of.