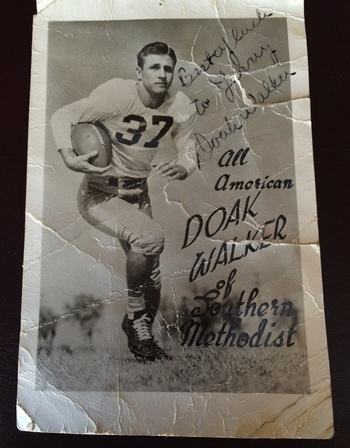 I picked this up at a Dallas Estate sale today
Doak Walker re-enrolled at SMU and rejoined the Mustangs football team.[3] As a sophomore, he led Southern Methodist to a 1947 SWC championship and was named to a myriad of All-American teams.[3] He gained similar All-American honors in 1948, and 1949. Walker won the Maxwell Award as a sophomore in 1947 and the Heisman Trophy in 1948 as a junior.
During his award-winning 1948 season, Walker gained 532 yards on the ground, carrying the ball 108 times for a 4.9 yards per carry average.[3] He also threw six touchdown passes from the halfback position, going 26-for-46 and gaining 304 yards in the air.[3] As a receiver, Walker hauled in 15 passes for 279 yards and 3 touchdowns.[3] On the defensive side of the ball, he intercepted three passes.[3] He also punted for a 42.1 yard average for the Mustangs, returned punts and kickoffs, and did duty as the SMU placekicker.[3] Walker finished the year with 11 touchdowns scored, which combined with his kicking put 88 points on the scoreboard for the year.[3]