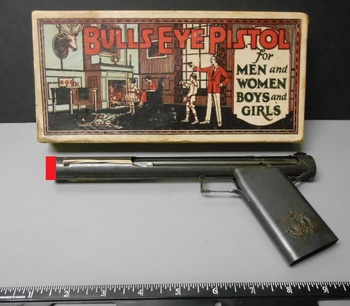 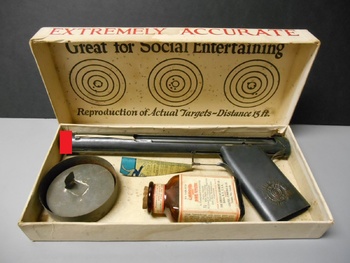 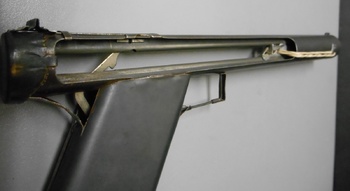 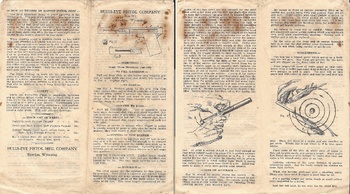 Great graphics on the box for this early toy! Originally made by a dentist in Rawlins, Wyo in the back room of his office (!!), each one was hand-crafted out of sheet metal and sold for about $3 back during the Depression according to the history I found online. It originally had three celluloid bird 'targets' (exceedingly rare to find today) and a filler tube that was lost and replaced by one made out of an old "Little Buster Popcorn" tin with a cute Palmer Cox Brownie image on the scrap.
The gun itself is powered by the rubber band you see with as many as 50 rounds of 9 ga. shot in a groove along the top of the weapon. As the slide was pulled back to the breech, it would lock into the trigger mechanism. ready to fire as the BB dropped down into the slide. The round metal item you see is a stamp pad with which you could duplicate the target rings on the inside cover of the box.
The last photo shows the original instruction sheet which brags that the gun was safe even if you shot someone in the eye! Better tell Ralphie's mom.....
It goes on to state that it was death on flies, so it did sate a kids' blood lust to a degree, I guess.