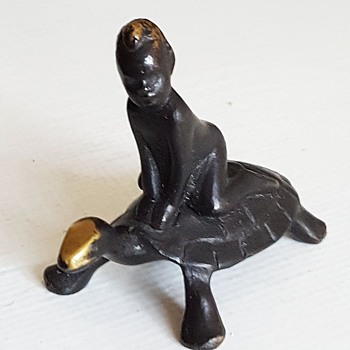 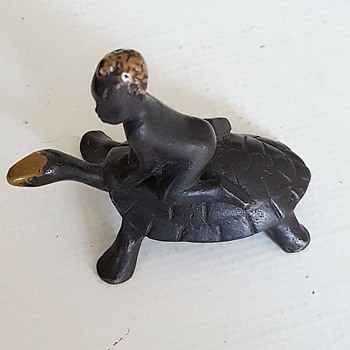 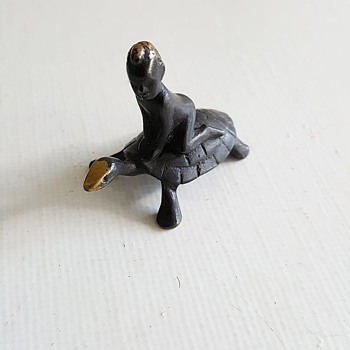 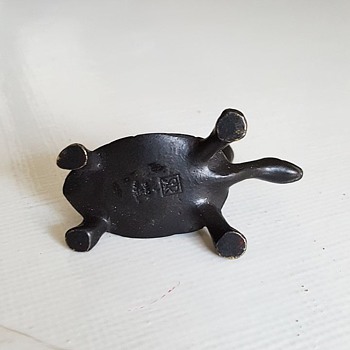 Another recent purchase from a European dealer, this one is tiny but rare , first time i have ever seen this example only 4cm height, width is 5cm, little bronze african boy sitting on a turtle by Richard Rohac Vienna . Little bit of History on Richard Rohac below from Wikipedia.

Richard Rohac (1906–1956) was an Austrian designer and master metal craftsman.
Rohac began and completed his apprenticeship with Werkstätte Hagenauer Wien in Vienna as a teenager, and stayed with the workshop another nine years before opening his own metalwork business in 1932.[6]
Rohac’s career was interrupted by military service and a period of internment in Greece. On his return to Vienna, he reopened his workshop and began producing the types of household items that had been lost or destroyed during wartime bombings. Products from this period are likely to be stamped "ROHAC WIEN."
When a market emerged again for decorative objects, Rohac turned his talents to the design and production of busts and sculptures, as well as everything from desk and smoking accessories to corkscrews to bookends to pretzel holders to candlesticks. He specialized in exotic – for the 1950s – African and Asian figures, and jungle animals. His "backward R/forward R" maker’s mark dates to that period, and appears on objects sold internationally through the export company Gebr. Gödde (Gödde Brothers).[7]
Rohac’s work was featured in an American newsreel on Austrian arts and crafts; one of his African busts was a state gift from Austria to the president of Mexico.[8]
He died in Vienna in 1956.