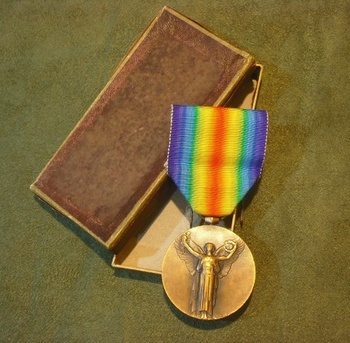 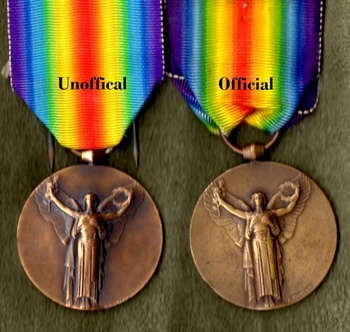 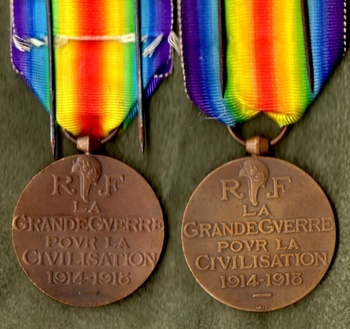 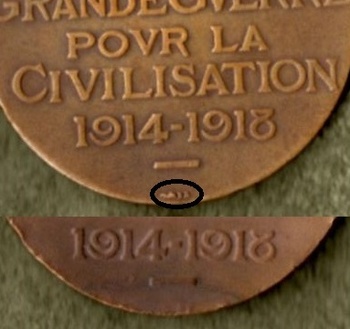 I was first attracted to the box this medal came in when I saw it on eBay a few years back. It was different, and the box looked different, so I took a chance out of curiosity. This is certainly not an official issue French Victory medal, but I don’t believe it’s a modern fake but instead a contemporary medal manufactured by a non-government contractor for sale to veterans. This was certainly not unusual. Veterans might store the issued medal as a keepsake and wear a copy, or they might not bother with the hassle of requesting theirs through the government.

The box itself is actually gold colored with a dark purple leather textured paper top panel and side trim glued to it. The planchet is just a tiny bit smaller than the issue one, but the image actually is the same size, crowded against the edges, the “A.Morlon” signature of the artist near the bottom is resting right on the edge. More interesting is the lack of a mint mark on the back. Official issues carry the mark of the Paris mint (circled) this copy omits that. Otherwise the mark would be resting on the edge like the “A.Morlon” does in front.

So, why do I think it’s an older unofficial type and not something modern meant to deceive? Well, these medals are common (about 2 million made) so there wouldn’t be too much pay off for the effort, but also – why copy the medal down to the artist signature on front, but leave off the mint mark on back unless you felt bound to acknowledge the artist but not to mis-represent yourself as the Paris mint?