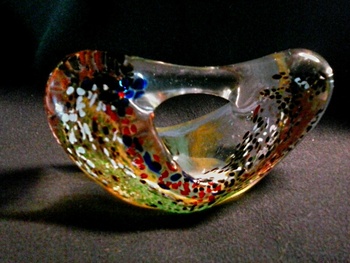 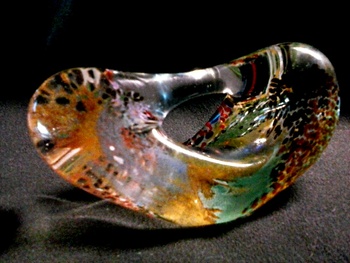 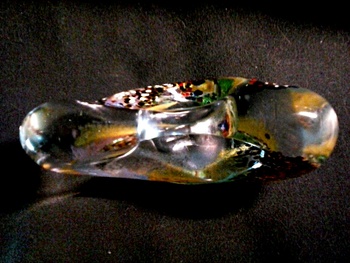 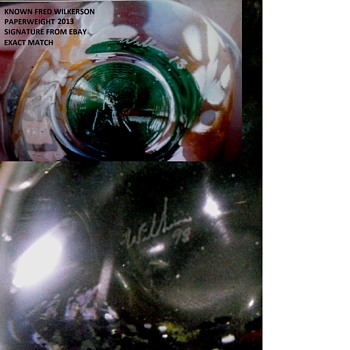 I thought this awesome abstract paperweight (?) would be an easy ID being signed and dated on the polished bottom. Started my search online and you would think something this unique would pop right up. Well as luck would have it the signature kind of trails off to nothing. It looks like Williamson or Wilkerson or even Wilshire. The date is clear enough though as "98". Nothing even close online using all those names and every type of description I could think of. Art glass, Studio glass, Confetti glass, modern, abstract, hole in the middle even biomorphic..nothing zero-zip-nada ! So either it's a very exclusive one of a kind piece or just an unknown piece of studio glass. Could be a small sculpture too as it measures 6" by 3" high. A really nice piece regardless of it's pedigree. -Mike-

NOTE: Finally got an ID on this piece thanks to CW member Emme. It's the work of the Fred Wilkerson Glass Studio, Moundsville, West Virginia. Thanks Emme :)

Fred Wilkerson made his first paperweight in 1975 at the age of twelve when his father, a worker at Fostoria Glass, built a furnace to make paperweights as a hobby. Fred worked alongside his father as much as possible, watching his every move. He spent the next fourteen years polishing his skills until he decided to make Wilkerson Glass his full-time career in 1989, where he would work with his father.
Wilkerson Glass, located in Moundsville, West Virginia, has sold paperweights as far as Germany and Austria, and throughout the United States. They have also done contracted work for companies such as Owens Corning and Danbury Mint, as well as The White House.
Fred also demonstrates his paperweight making technique at Carriage House Glass located at Oglebay Park in Wheeling, West Virginia.