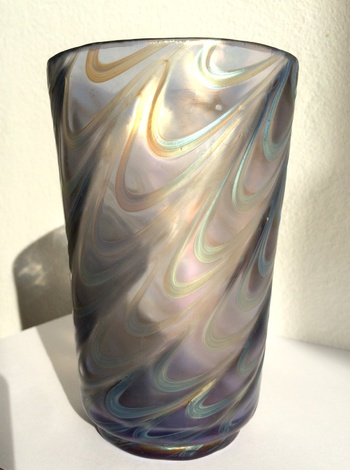 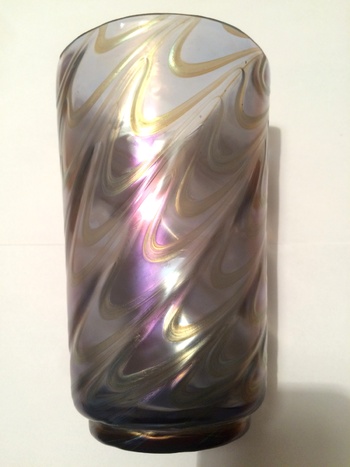 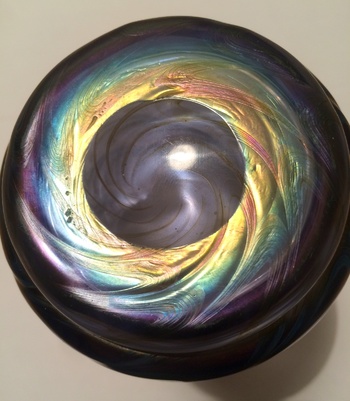 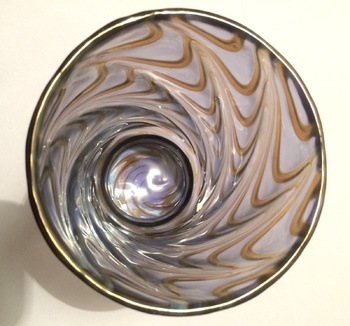 (I'm posting this for Andy Jelcic)

There are three periods in the Loetz production that tend to be called Deco: the first from about 1914 to 1925, which encompasses Tango vessels and later Ausfuehrungen (and this one is not Deco), the Prutscher & Schieder Phaenomen revival and cameos in modern design (not the French Art Nouveau type ones) around the International Exposition of Modern Industrial and Decorative Arts in Paris 1925, which gave Art
Deco its name, and the mid-thirties, the last serious attempt of saving the factory. It seems that at that time Loetz used two production sites, one in Spiegelau for Schaumglas and the other in Klostermuehle, which tried to merge old techniques with new forms, exporting mostly to North European countries and GB. This vase belongs to the last group. It is quite rare, because the output of the factory was already very low in that period and its top runner was still the good old blue Papillon (partly with Candia accents). I would accept Ricke's definition of the ground as "manganviolett", while the lines of the applied pattern change from silver to bluish and golden, depending on the light. There is one more interesting feature, which I have observed in another vase from this period, but thought it might be just worn out from handling. The decor is much thicker and more pronounced in the upper part, while it is very thin and almost transparent in the lower portion of the vase. The irisation is stronger in the lower part and lighter in the upper, which means that the spreading - verlaufend - feature goes in both directions.