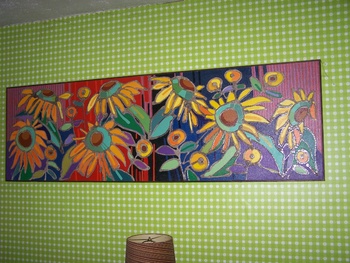 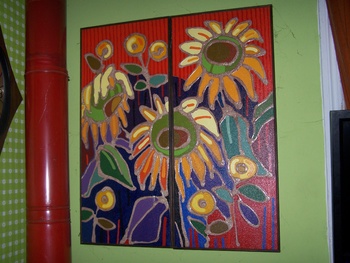 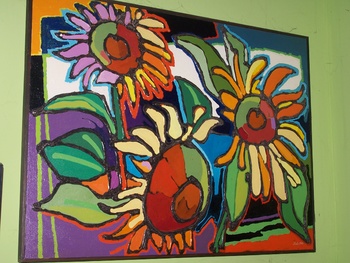 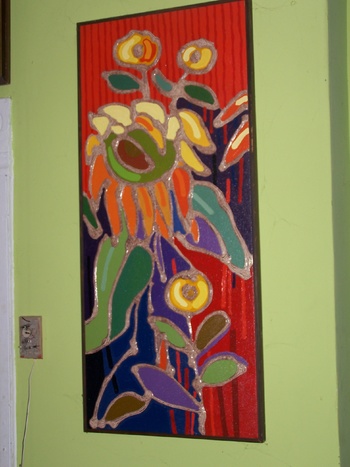 I have 9 pieces by Brother Mel Meyer, I based My Living Room Colors from his paintings.
Brother Mel was a Marianist monk based out of Missouri.[2] He was the fourth of seven children in his home and the only one to become a monk. He was raised in Old Town Florissant, a suburb of St. Louis, by his parents, Harry and Margaret Meyer.
He graduated from McBride High School, taught by members of the Marianist order. He entered the order in 1947 and took his final vows in 1952.He completed his undergraduate studies at the University of Dayton in Ohio. He taught religion and social studies at Central Catholic High School in San Antonio in the early 1950s. He completed his master's degree at Notre Dame in art in 1960.
His work included metal sculptures, watercolors, stained glass, frescoes and acrylic on canvas paintings. He worked, as well, with handmade paper and textiles. He did much of his work at his studio on the campus at Vianney High School which he opened in 1969.
Awards and honors
Brother Mel was awarded an honorary PhD from St. Louis University. There is a sculpture garden in St. Louis devoted exclusively to his work. A book about his life, "Brother Mel: A Lifetime of Making Art,” was published in 2009.
“Art is an outgrowth of what the person is," said Meyer. "I’m a happy person. The feeling of being happy finds its way into the art."