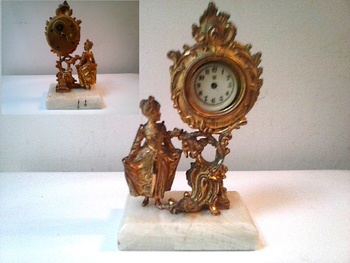 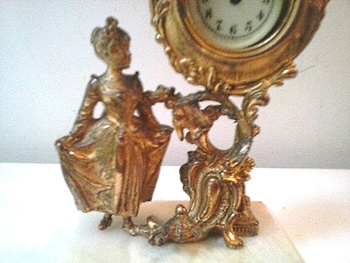 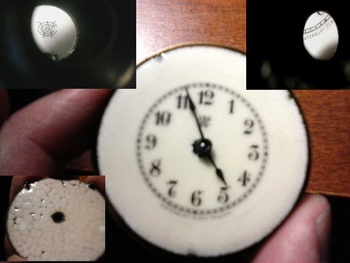 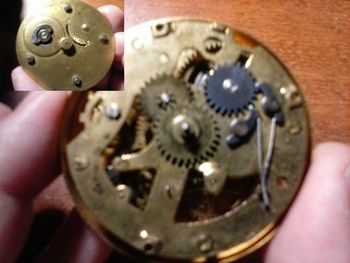 I found this little Waterbury clock sitting on the top of the jewelry case at Goodwill. Didn't have to think twice about snatching it up. It's only 7" tall and the white onyx base is 4" x 2.5". Made out of nice gilt metal it's quite heavy for it's size. A beautiful French rococo design of a young women with birds. The porcelain clock face is a pocket watch size 1.75" in diameter. It was already tightly wound so I figured I would see if I could revive it. Looks like someone else had a try so I figured it couldn't hurt to check it out. Two tiny screws hold the movement to the frame. I tried a bit of clock oil and I did get it to tick a little bit but it really needs a complete overhaul. It wasn't hard to take apart but putting it back together was a pain. The hands would not go back on so I just taped them to the base for safe keeping. They actually hold the dial to the movement until you get it back in the case. The movement has a few patent dates on it. They're stamped into the main spring cover. One is for 1891. They were too small to get good pictures though. I've not been able to find this exact clock online but it seems to fall into Waterbury's novelty clock category. Waterbury would eventually morph into the "Timex Group USA" by 2008. I'm not sure what it's worth or if repairing it is even cost effective. It would be awesome to have it running again though. -Mike-

In 1854 Connecticut's Naugatuck Valley, was known during the nineteenth century as the "Switzerland of America." Waterbury, CT based brass manufacturer Benedict & Burnham created Waterbury Clock Company as a clock-making subsidiary in the advent of brass gears being introduced to clock-making.
Waterbury Clock Company was legally incorporated on March 27, 1857 as an independent business with $60,000 in capital. Sister company Waterbury Watch manufactured the first inexpensive mechanical pocket watch in 1880. During World War I, Waterbury began making wristwatches, which had only just become popular, and in 1933 it made history by creating the first Mickey Mouse clock under license from Walt Disney, with Mickey's hands pointing the time. This was made under the Ingersoll brand.
In 1940, the company came under the ownership of Thomas Olsen and Joakim Lehmkuhl and was renamed the Time Corporation in the United States. Watches with the Timex brand name were first used in 1946 with a small shipment of nurses' watches. The "X" suffix "was used to evoke a sense of technological advancement. 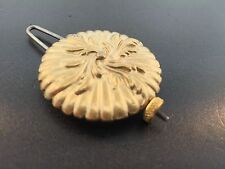 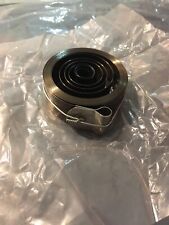 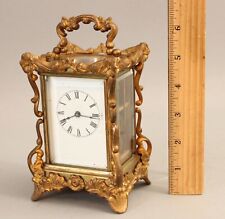