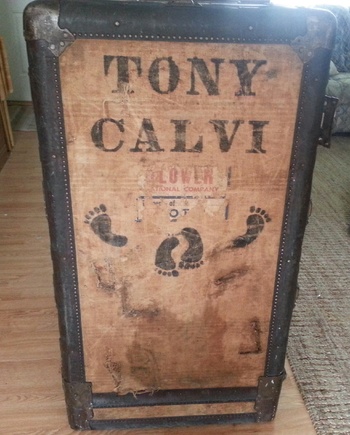 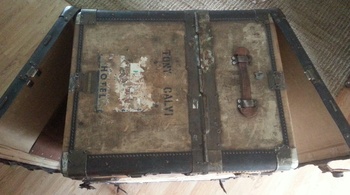 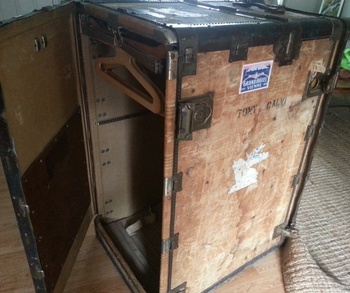 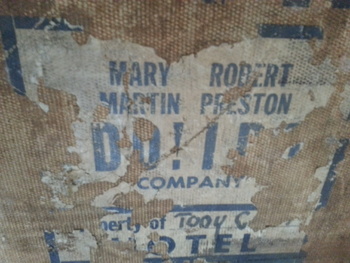 Imperial Pathfinfder, manufactured exclusively for Saks Fifth Avenue. Saks and Company serial #4074.
Ok so I spent the day roaming the country side with my daughter yesterday and came upon this wonderful monstrosity at a garage sale! I know it's not a couple hundred years old but it's not without its own story of a different time. I don't particularly like wardrobe trunks, but this is awesome! As you can see its huge, covered in the thickest cloth I've ever seen. And has 2 doors on each side. One side contains lots of hangers, the other drawers with a secret compartment under the last drawer. And the best part is that IT SPINS!! I do realize this may not be neat to some. But I love it!!!! Ok, now for the cool stuff. It has a name on it, Tony Calvi, it's on all sides. Then there are "stickers" for lack of a better word. They describe when what and where this trunk had to be. You can see the sticker in the last picture. That was a broadway musical, and to this day is the longest running musical still being done today. What makes this so awesome is that Tony was part of the first one starring Mary Martin and Robert Preston in "I do I do"! There are also other stickers on here and they go in a succession of broadway musicals. After the run of "I do, I do"! There is another called "Your Own Thing" which was a rock musical that ended traversing the globe a bit. A few of the luggage decals from hotels insinuate indeed that Tony traveled with the play. There are 4 others that I am having a hard time making out along with other info I can't put together yet. Here's the kicker, I can't find a Tony Calvi involving broadway musicals at all. However I did learn that dancers and choreographers were never considered part of the play or musical, and until late 1960's were never even written down. I am assuming he may have been a choreographer due to the feet on the front, as well as a dancer. Im pretty sure Tony is short for Anthony as well. And that he is probably Italian. His name is some of the hangers, as well as written on the tags for the shows. Possibly he was an immigrant? I don't know, but I do know this trunk has seen amazing people, places, and things, that's what I love about it! I didn't go into being from Saks Fifth Avenue. The most posh place to purchase items then and now. I'm going to contact someone having to do with broadway and see if I can find out more about the elusive Tony Calvi!
I love this trunk, no matter how much real estate it takes!