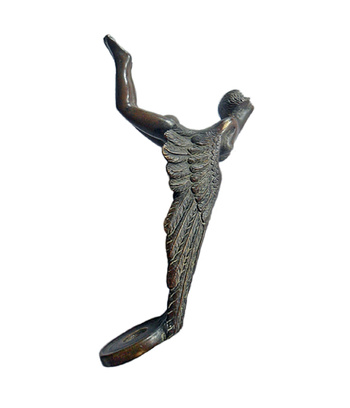 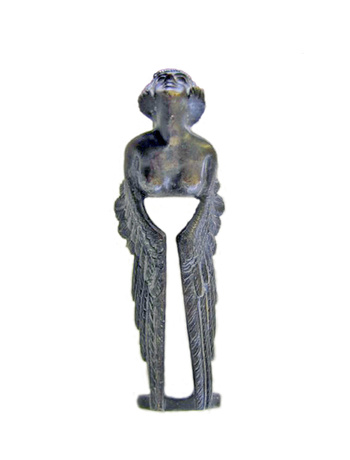 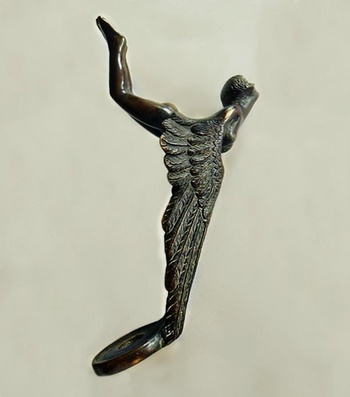 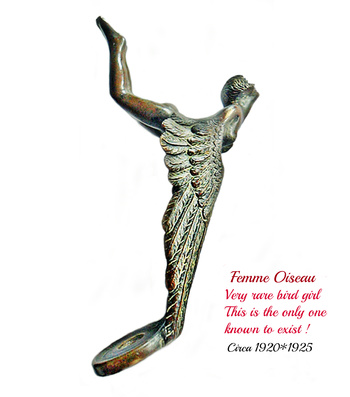 Femme Oiseau, Very Rare Car Mascot, Circa 1923
A one-of mascot, this probably was a piece that was made by a mascot bronze factory to demonstrate to clients that they could make an item to ones own design. Possibly used by a mascot salesman in his sales kit. The design and feel of the engraving is razor sharp, even the face has pinpoint accuracy, which you just never find. Also the strands of hair are etched precisely on her bobbed cut, the feathers are superb !!~

When I first bid on this it was at an auction in England with nothing but a picture you could not really see this piece but another one. After the auction was over I emailed them to see if I had won the auction. I was told not and that they had charged me for 2 other lots that I never bid on. In a few weeks I had not gotten over not winning but shortly had an email telling me that I had. There had been a mix up at their auction. In 2 more weeks the piece was delivered and I saw a revelation that I had not expected.

This is the most rare mascot that I will ever find and have the privilege to own, never before seen by any of the 3 authors on mascot books who I have consulted with. Extremely detailed and chased (engraved) it may have been specially designed & made for a client by one of the manufacturers of mascots, it also is possible that it was made as a show piece for reps of the mascot mfg. company to show that they made one-of mascots for the wealthier clients to show their individuality. Either way it is so detailed it is extremely rare, even the face has unrivaled accuracy. Not known if English or French origin, the chance of me ever finding this was this once in a lifetime !!~