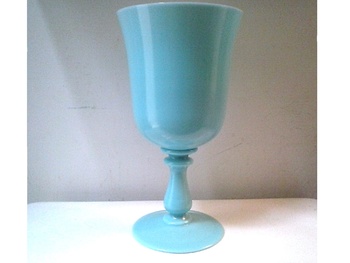 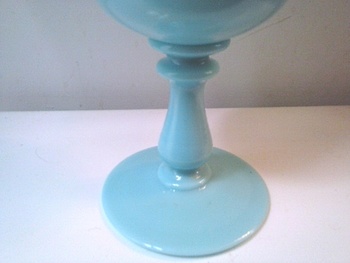 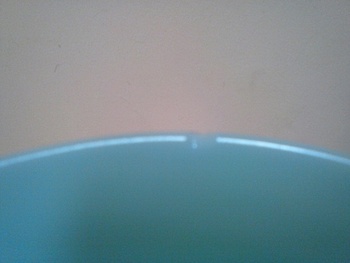 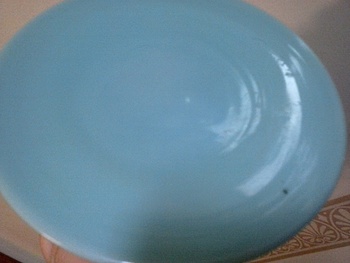 I picked this up at Goodwill this morning. Really love the color and the shape. Looks like a huge chalice. I finally found out it's made by Vallerysthal-Portieux and is known as a "presentation" goblet. The rim has a small nick in it. I did run my finger around the outside and didn't feel it. It's on the inside edge. The cashier noticed it and asked me if I still wanted it. Sure for a buck fifty why not. The rim is cut and flat and there are no seams. So I'm not sure if it's blown or formed in a mold or what. The color is what really caught my eye. -Mike-

Vallerysthal/Portieux is a glass producer with a complex history. Founded in 1836, at Lorraine, France, as Societe des Verreries Reunies de Plaine de Walsch et Vallerysthal, which then became Klenglin et Cie in 1855. A mix of Bohemian and French glass workers created a thrilling array of opaline and decorative glass. In 1870 however, this area of France became part of Germany. Most of Vallerysthal sales however had up to this point been within France, but as the factory was no longer within the French territory they now found it difficult to export their glass out of Germany. To get around this problem they quickly purchased the Portieux glass works which was in Vosges, France and whilst the head office remained in Vallerysthal, they could now export through Portieux. The new name was registered in both French and German and became the Vallerysthal/Portieux name is what we still refer to today.
As with all Vallerysthal/Portieux coloured glassware, the robin's egg colour type is almost unique to them. It is an aqua turquoise which was produced using additions of copper oxide to the batch of crystal with varying amounts of other non-metallic elements. The use of Copper as a glass colorant can be traced back to the Roman Empire. In fact, little has changed throughout the history of glass making, as metallic oxides & non-metallic elements (such as Carbon, Phosphorus and sulphur for example) have been used to produce all coloured glass to this day.