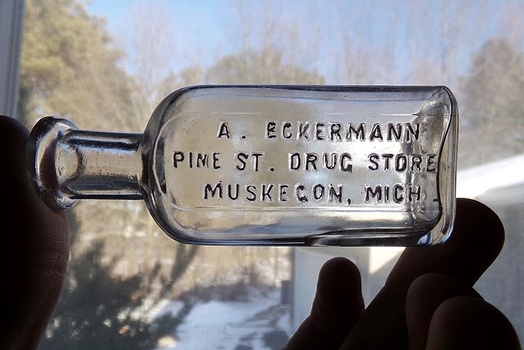 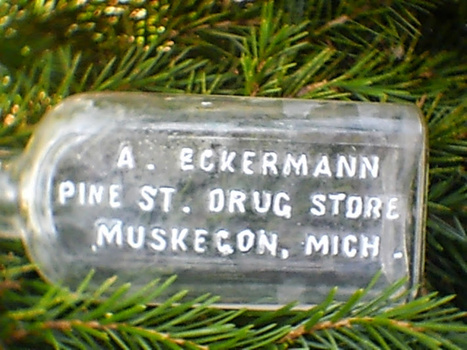 Pic one is a month after treatment.
Pic two is before treatment.

The bottle, as seen in photo two (from my old camera-- I've had this bottle so long), was quite stained with white, or mineralisation, from being dug up.

I filled it and rubbed it with Baby Oil.

A month later, pic one still shows it being quite clear again. Baby Oil does not work like this on heavily-stained bottles, though.

The issues with Baby Oil mainly include dust-gathering and leaving it oily, which can be wiped off albeit a wet look remains.

Do not do this to sell dirty bottles. It makes you an immoral bad word. This is an idea for display-purposes only.

The Pine Street Drug Store was founded by Alexander Heinrich Adolphus Eckermann, who was a 3rd Michigan Regiment Civil War veteran and moved to Muskegon to form his drug store here in 1881.

His and about 250 other businesses burned in the great Pine Street Fire of 1891. After that he vanishes from the records.

In 1907, an Alexander Eckerman (one n, not two) appears in the books as a new druggist but claims 31 years of-- my made-up word-- druggery.

Before Muskegon, he had drug stores in Grand Rapids, Michigan. This bottle is a Whittal & Tatum Co. piece.