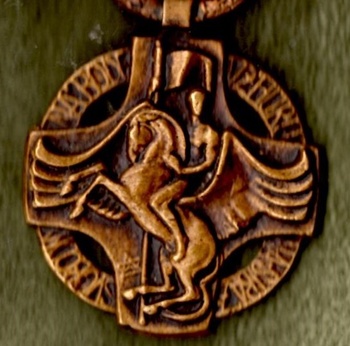 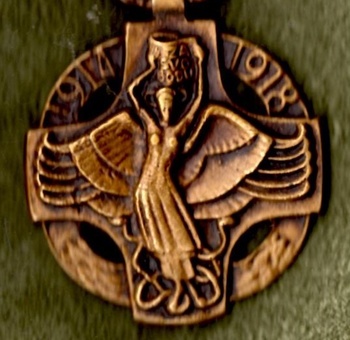 I purchased this medal on eBay to display with my Czechoslovakian Victory medal. Ever since I opened the package, I’ve suspected it may be a reproduction. What’s good is the ribbon does not fluoresce under a black light like synthetic fibers do, and the main part of the medal is a separate piece and swings like a hinge from the decorative loop through the ribbon. What’s bad is the features are not as sharp as I would expect, and medals I’ve viewed online have more yellowish and aren’t darkened in the recesses. The features are sharper than the images above here would indicate.

Czechoslovakia did not exist at the time of WWI, but was part of the Austro-Hungarian Empire. However, there was a nationalist movement before the first shots were fired. As the war broke out, Czech legions were formed to fight on the side of the allies with the assurance that an independent Czechoslovakia would emerge after the war. In the summer of 1918 a provisional government of Czechoslovakia was set up in Paris.

Medal of the Revolution was instituted in July 1918 and awarded to members of the Czechoslovakian Army who volunteered for service before the formation of the Provisional Government, and to others who had rendered service towards the independence of Czechoslovakia.

Medal consists of a cross over a circlet with voids between the circle and the cross. The obverse depicts a winged horse with a rider holding a flag. The ring reads "VZHURU NA STRAZ SVOBODNY NA'BODE" (keep good watch, free nations).

The reverse has a winged figure holding a tablet over her head that reads "ZA ZVOBODY" (for liberty) while she is treading on snakes. The circlet gives the dates “1914” and “1918”.