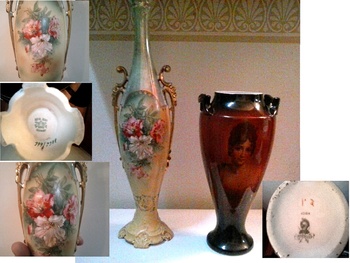 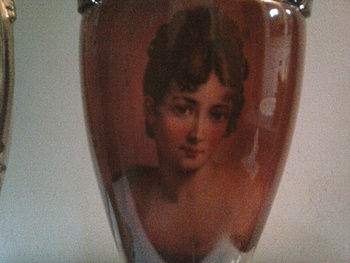 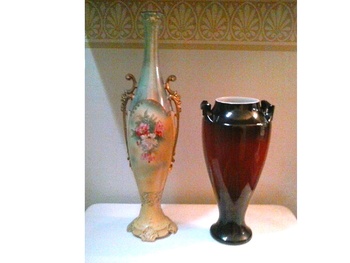 Here's today's offering from Salvation fresh off the production cart this morning and into my hands. Two very nice vases from very different makers. One German the other American. The elegant slender 16" ES Royal Saxe vase from Germany has gilded handles and hand painted flowers on both sides. The green crown stamp on the bottom was used from 1861 onward. It's not perfect though. I noticed the small chip to the foot on the bottom but not the 4" hairline crack in the neck until I got home. Oh well, I have very few perfect pieces and it doesn't detract from it's beauty at all. The 10" Warwick China vase is an American piece from West Virginia. The lovely portrait is transfer decoration on their popular brown red body. The bottom carries their mark and the cryptic word "IOGA" which has no known meaning according to Kovels. Warwick made these to mimic Rookwood's native American portrait vases which bring huge money at auction in today's market. My lady Warwick here is not one of their more desirable pieces however compared to the monk and Indian decors but the color and shape is what caught my eye. No damage either ! -Mike-

ES Germany porcelain was made at the factory of Erdmann Schlegelmilch from 1861 to 1937 in Suhl, Germany. The porcelain, marked ES Germany or ES Suhl, was sold decorated or undecorated. Most of the porcelain with the ES Germany mark is from the late 1890s or from about 1902 to 1938. Other pieces were made at a factory in Saxony, Prussia, and are marked ES Prussia. Reinhold Schlegelmilch made the famous wares marked RS Germany.

Warwick china was made in Wheeling, West Virginia, in a pottery working from 1887 to 1951. Many pieces were made with hand painted or decal decorations. The most familiar Warwick has a shaded brown background. Warwick's most desirable pieces are those decorated with portraits of monks or American Indians and its vitrified chinaware, an unusual product for a nineteenth-century American company. The name Warwick is part of the mark and sometimes the mysterious word IOGA is also included.