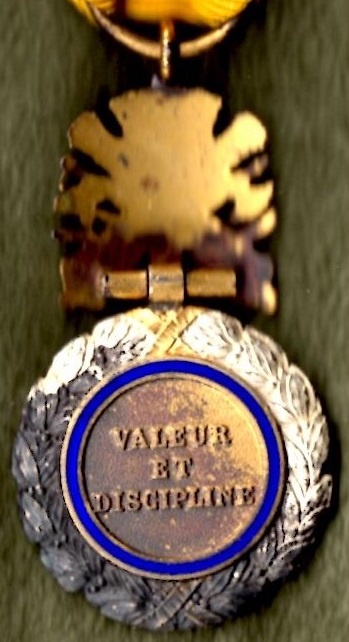 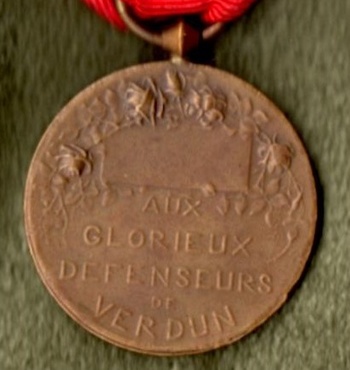 The French Médaille Militaire (Military Medal) was awarded to other ranks of the Army for meritorious service and acts of bravery in action against the enemy. After WWI it was also authorized for combat wounded, and it was also authorized for award to Generals serving as commanders in chief. It is currently the third highest French award, after the Légion d'honneur and the WWII Ordre de la Libération.

The front of the medal features a silver laurel wreath around a gold metal center bearing an effigy of the French Republic in profile. The blue enamel circlet is inscribed with the name of the French Republic and the year 1870 (a reference to the founding of the Third French Republic, which was the government in power at the time of WWI). The back reads “VALEUR ET DISPLINE" (Valor and Discipline). This medal and others in my collection came from the same lot as the one below – possibly the same recipient.

One hundred years ago the Battle of Verdun, the longest and one of the bloodiest battles of all time was being fought. It started in February, and lasted till December. The German strategy was to attack and hold an area that the French could not allow themselves to give up, then let the French army bleed itself white trying to force the Germans out. It was not about gaining any strategic advantage but attrition - it was about killing as many of the enemy as possible. About 70% of the French army would rotate through the battle. In the end over 700,000 soldiers died in an area less than 10 kilometers square. About half were French and half German.

The Verdun medal was created by the Municipal Council of Verdun to commemorate the heroism of its defenders. Several versions of the Verdun medal exist. This one called the Prudhomme version, named after its designer, is one of the scarcer ones. The front shows a helmeted uniformed figure representative of the French Republic with a laurel branch and the words “VER-DUN 1916”. It’s signed “PRUDHOMME” at about 2 o’clock, but it’s too faint to pick up on this scan. The reverse has a blank plaque with roses. Beneath that is inscribed “AUX GLORIEUX DEFENSEURS DE VERDUN” (To the glorious defenders of Verdun)