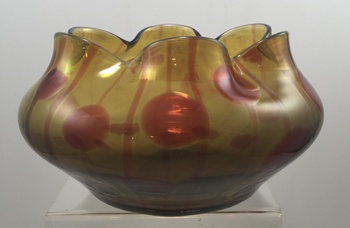 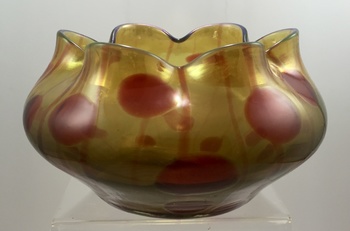 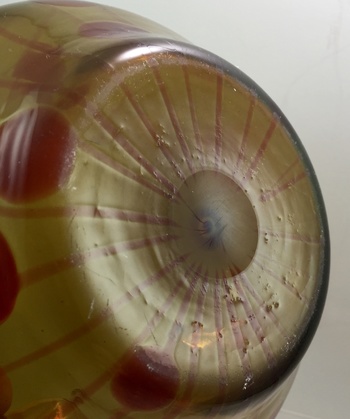 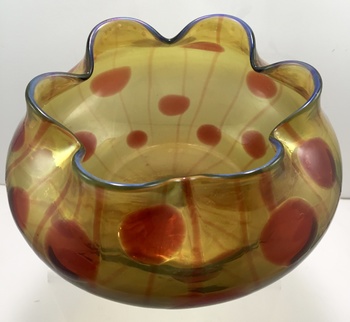 In Greek mythology, the Titan Helios was said to be the personification of the sun. In this décor, you have a representation of the sun in glass, complete with revolving planets! Originally thought to be a variant of Ausführung 122, we now know that this is actually an earlier décor that comes in an amber yellow ground with either red or green streifen & flecken (stripes and spots). The clue that this is an earlier décor is that it is often found on shapes on which the Cytisus décor is also found. This would tend to indicate an earlier production date than previously thought. With the realization that there were several shapes that this décor and Cytisus shared in common, I looked at the Series II Paper Patterns to see what other décor names were mentioned on shapes where Cytisus is listed. One name stuck out: Helios, a décor that comes in grün (green) and rot (red) varieties, and is mentioned in a small group of only eleven pattern numbers! Using the photo examples from the “Ausf 122 Variants” page on Loetz.com, I was able to find one of the shapes that confirmed an example of Helios in green (PN II-916). I forwarded this information to Deb Fitzsimmons, who was keeping her own files on this décor. She quickly found another example, this time in red, on a different shape for which this décor was documented (PN II-910), thus sealing the identification. Previously only known from written sources (mentioned in production notes as early as 1899 and as late as 1904), we can now document several examples in both red and green. These can be found on the new “Helios” décor page on Loetz.com, which can be found here:

Incidental fact: the mother of Helios was the Titaness Thaea, and in Loetz terminology, Thea is a pale yellow color.