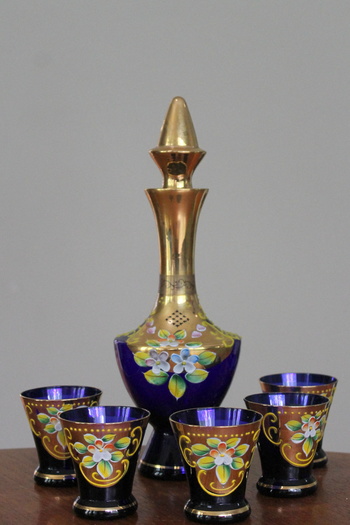 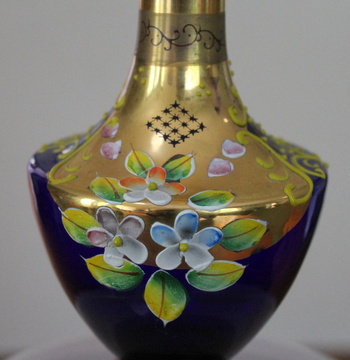 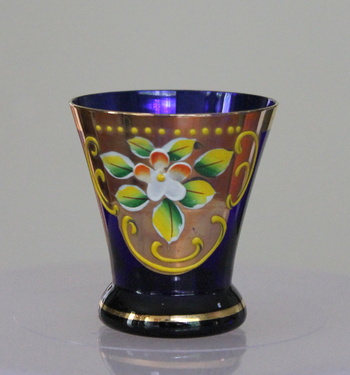 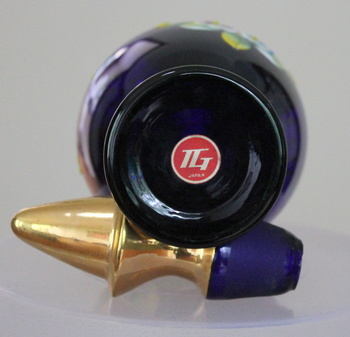 I have been looking for a while for an example of Japanese enamelled glass and happened to spot this behind the counter at a Vinnies the other day.
It was a nice surprise because it was a Vinnies I rarely visit as it's usually a dud one.
The conversation went like this:
"Excuse me, may I please have a look at the decanter and glasses on the middle shelf?" (I'm always very polite to volunteers)
"Yes" (sternly and with no other response or movement for 30 seconds or so)
"Is that a problem?" (I was confused with the lack of action)
"Well it is Japanese" (in a sneering voice)
"That's fantastic! I would love to see it!" (lots of silence again)
"Most people don't want it because it's not from Italy or Czechoslovakia you know..." (frowning)
"I probably will, but I need to see it." (another 20 seconds or so and the service deficient cashier slowly turned and reluctantly reached through the boxed sets of Buffy, and The Office, the glass punch set, the RCR wine glasses, and the tattered Penguin Classics to pass the decanter to me.)
"May I see the glasses too please?" (doleful sigh, and a reluctant reach and bang, five times, of glasses on the counter)

I took my time checking the glasses under her belligerent eye even though I knew I was going to buy them. Eventually I gave her the good news;
"I'll take them thanks."
"Are you sure? They're Japanese you know." (worried now)
"Yes, I saw the stickers. I'll take them. Here's my card." (I was waiting for a no on EFTPOS)
"Why thank you dear!" (all smiles now the money was coming. I think it was a sociopathic volunteer - not suitable for paid employment anyway.)

I paid $40 for these, a pretty average price for anything reasonable in most of our Vinnies now. I am happy however!

Cobalt blue decanter and glasses, ground stopper, hand painted enamel flowers and motifs. As good as any I have seen from Murano and probably derived from their works.

Best of all: A couple of TG stickers. Who is that?
TAJIMA GLASS JAPAN