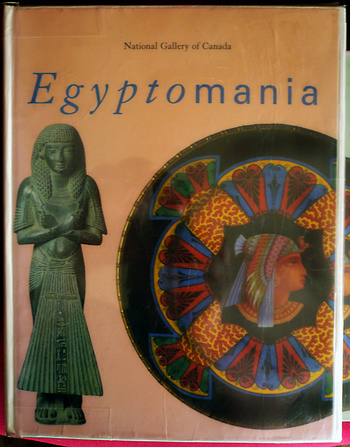 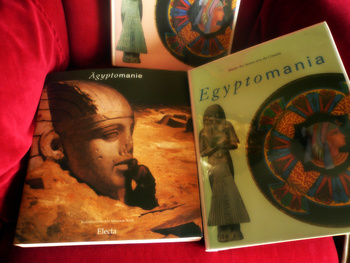 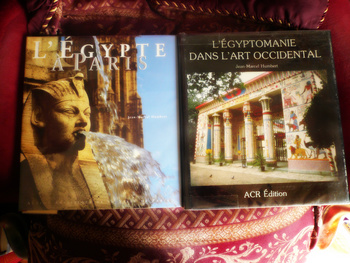 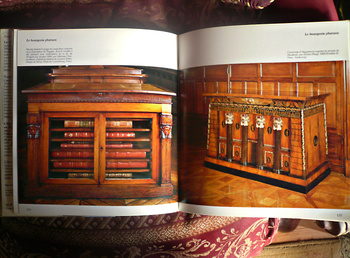 Hi, These images of some of my books on Egyptomania are posted for valentino97.

The books in the first 2 photos are the same, 1 version English, 1 version French(green cover) and 1 version German which is a different German book, same text in German, a different art cover on it, called Agyptomanie, text in German.
As a book dealer I collected all 3. The English and the French books I had converted to Hard Cover books at a local Book Bindery close to where I live. They were sold by the National Gallery of Canada. My friend there was Michael Pantazzi and he suggested the idea to Marcel Humbert director from the Louvre, from what he told me. Michael was one of the 3 authors, (French, English, German) and had a couple drawers in cabinets full of photographs collected. This book came out in 1994 and I went to visit him in early 1996 and I stayed at the Lord Elgin in Ottawa. Lucky I had some friends in Ottawa to visit also. It was nice to make a new friend that day. The book is 607 pages. Some of the finest examples of Egyptomania on those pages. The items in the books were on display in Ottawa, Paris, and Germany at different times, when these books came out.

The third photo has 2 other hardcover books on Egyptomania I pulled out. Both have many pages and the black "Occidental" book have the 4th photo double page photos I show. I got that book as a gift from Michael as he had 2 copies, that book Occidental, was a very expensive gift to get from Michael. The next year in 2007, business took me to Toronto, and I had a definite premonition which hit me hard that I would bump into him in Toronto, and sure enough I was on the Bloor street where I thought we would meet and we did. I did not know he had ties in Toronto also. The plastic removable covers I put on my books will produce some shine, but I use them because with them the covers will look new for years, and that has made them indispensible !~