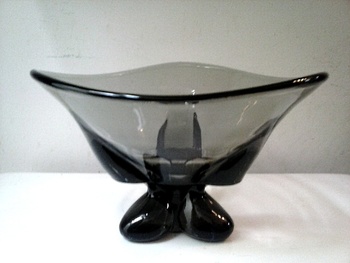 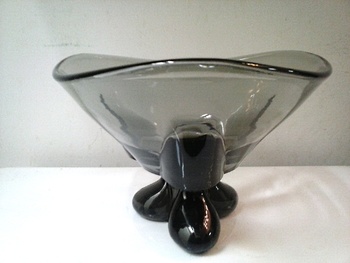 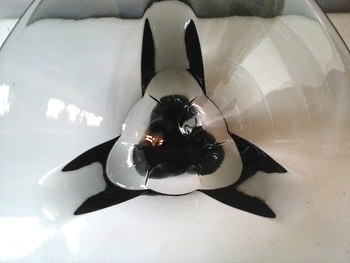 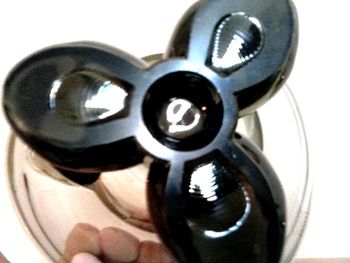 I hadn't been to Volunteer's of America in about a week. So it was nice to find this great little bowl. Made by the Viking Glass Company it was part of their original "Epic" line pattern # 1209. Done in a smokey clear color they called "Charcoal". It's 5 1/2 " tall and 7 1/2" across the top. Beautiful "Deco" lines although it's technically a Mid-century or Atomic piece from the 50's. -Mike-

In 1944, the New Martinsville Glass Company officially changed their name to the Viking Glass Company. So, as not to confuse the very patriotic public (WWII was still in progress) and establish their American Company identity right from the start, their new slogan would be a picture of their Viking Glass Co. logo with the words “This trademark means made in America”. Still located in New Martinsville, West Virginia with a new name and a new take on art glass.
One of Viking’s most popular lines was the "Epic" Line produced from 1956 to 1976. The line was populated with bold colors and free form shapes perfect for the mid-century modern craze that had started. The original colors were: Amber, Amethyst, and Charcoal. The evolution of the line eventually included the colors: Avocado, Bluenique, Honey, Persimmon and Ruby.