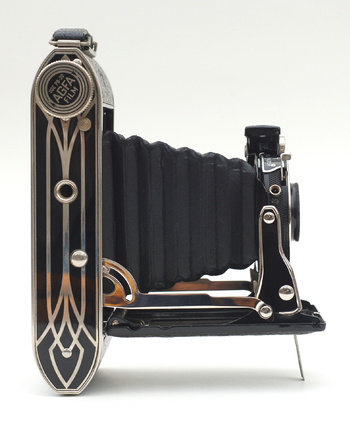 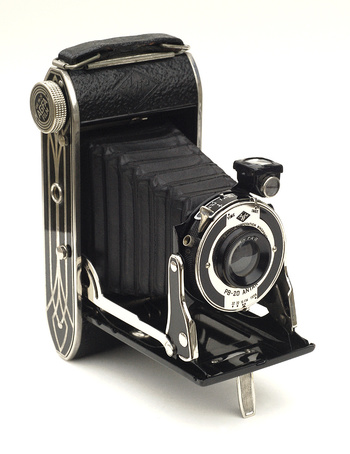 Ansco merged with Agfa in 1928, and cameras bearing the Agfa-Ansco name were produced until about 1943, when the company's association with Germany became a problem at the outset of WW2. During those 15 years, they made alot of cameras, including many folding-bed models. I think this one is the most attractive one of all, mainly because of the elegant art-deco design on the sides.

Rather than assigning model names, most of Agfa-Ansco's folders were referred to by the name of the lens on the camera, along with the type of film it took ("PB-20" film is equivalent to Kodak's 620 film). This makes things a bit confusing. When I was looking for this camera, I had to search for combinations of PB-20, PD-16, Antar, Tripar, etc.
I'm glad to have found this one, and at a reasonable price. The ones with this particular deco pattern tend to bring higher prices than similar, but less-fancy models.

This camera was made c1935 in Binghamton, NY.