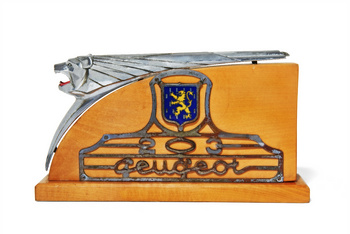 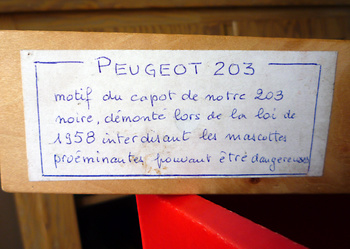 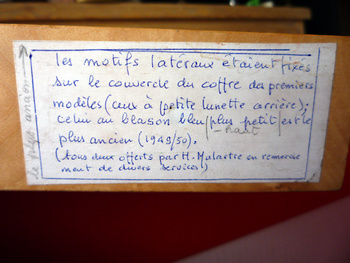 The Peugeot 203 is a large family car which was produced by the French car manufacturer Peugeot between 1948 and 1960.

The car was exhibited at the Paris Motor Show in 1947, but by then had already been under development for more than five years. Volume manufacturing was initially hampered by strikes and shortages of materials, but production got under way late in 1948, with buyers taking delivery of 203s from early 1949.

The 203 was Peugeot's first new model launched after World War II. During its twelve-year production run nearly 700,000 203s of all variants rolled off the assembly line in Sochaux, France. Between the demise of the 202 in 1949 and the launch of the 403 in 1955, the 203 was the only model produced by Peugeot.

I had seen the mascot before but not with the fantastic base, so I knew it had good provenance. From there this mascot achieves special recognition from The Automobile Museum Henri Malartre - Culture City of Lyon. Henri Malartre gave out a small number of these mascots on bases for favours rendered to him. His museum is a landmark in an old castle. Many thanks to Manikin for helping with the papers to obtain this and other mascots from the famous former collection of PASQUALE GIORDANO Italian mascot collector, whose estate sold his famous collection of nearly 1000 mascots, an unheard of quantity of the most famous french mascots. The sale was originally for around 600 mascots but by the time the sale catalog was produced it was for nearly 1000. Some of the over 800 lots had up to around 3 mascot items in them.