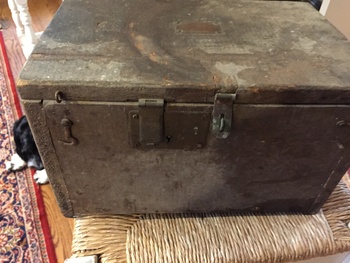 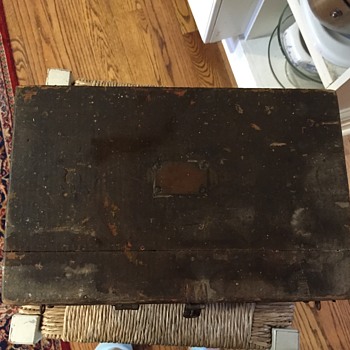 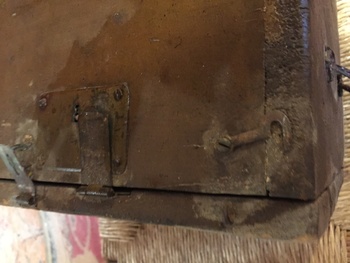 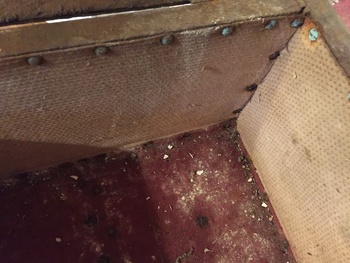 Okay, so this one is pretty dirty. I wiped the outside off with a damp sponge but other than that have not touched this for two years, when I first bought it in a little junk store in the Catskills somewhere. I was told that it was a box probably made by a soldier to keep his things in. It definitely looks handmade and as you can see (sort of) from the last picture, it was lined. The bottom, which is pretty disgusting, is some sort of felt and the sides, which are totally intact but also quite filthy are some kind of thick textured cotton or silk. The fabric is tacked down with upholstery nails, many of which have rusted, especially on the bottom. On the top is an engraved metal plate with a name in script. I can't quite make it out but the first name appears to be Oscar and second name starts with an L I think.
It has been painted brown and most of the paint is still on the chest/box, except on top where some may be missing. Because I have been so ginger about cleaning it I don't really know the extent to which it has lost paint. It does not smell great and is a little too dirty for my taste. I feel I would use it if it weren't quite so filthy but am reluctant to clean it up for fear of "ruining" the history. Any thoughts?
am being a bit aggressive putting it in the military category since I don't know whether a soldier made it or not.