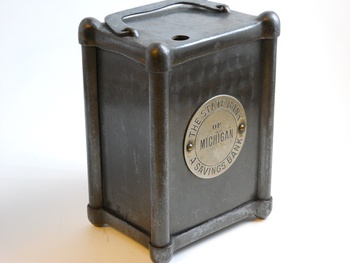 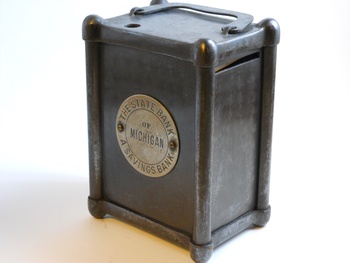 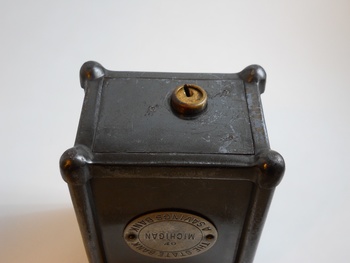 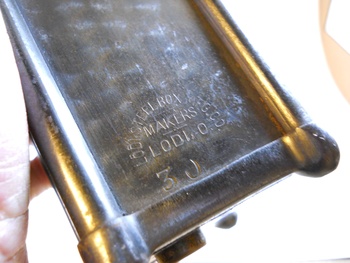 Good Evening CW Members----11:30 PM)2016-5-2
What's more fun than going to your treasures acquire over the years without living your basement, hummm, bin and bin of collectables.
Tonight just decide to go to few more of my Advertising steel bank collection and pull out some nice piece, extremely scarce to find, this manufacture was located in Ohio, United State, LODI STEEL BOX MFG.CO MAKERS,LODI,OHIO, this example from "The State Bank of Michigan" on the front plate, they add the word"A Saving Bank" because first this steel bank was to provide the service to the small depositor, this idea was very popular late nineteen century till mid 60s, this way more depositor have access to the banking system, no matter if they far from the city, when the steel bank was full of coins and bill, the depositor bring in to the assuming Bank to be opened by the teller and deposit the account related to the serial number engraved on the box(this case #30)the picture #4 show the half circle mark from Lodi steel box mfg, one of my best example, very clear.
This shape of steel Bank is scarce, I found only 4 of that model over the years, usual they are square, the construction is even more intrigued and ingenious and make it very strong, during the assembly process they insert 4 metal pin on each corner before pressed the top and bottom together, a small door at the base and a four lever lock complete all, an anti dipping coins opening prevent any coins to come out when the bank is turn upside down.
I did't find any steel Bank from this Maker with a different finish on, always being polished steel, like the above post, very attractive and the patina very stunning for sure, as to be clean in the proper way and nourish the steel from time to time to prevent rust to stick.

The owners of the State Savings Bank, in the 1890s, turned to Stanford White who may have been the nation’s leading architect at that time. White, the son of a prosperous Shakespearean scholar and actor, was born in 1853. He began his architectural career by apprenticing with the nation’s most well-known architect, Henry Hobson Richardson. He then traveled to Europe as young architects did and studied at the École des Beaux-Arts. Perhaps because of that training, he was one of the leaders in bringing the ideals of Italian Renaissance architecture to the United States. Upon his return to New York, he joined Charles Follen McKim and William Rutherford Mead to form the highly successful McKim, Mead and White firm. This firm designed some of the most esteemed structures from that era. This includes the east and west wings of the White House, Pennsylvania Station in New York, the James Farley Post Office in that city that will soon become the Moynihan Station, the Boston Public Library and the Brooklyn Museum. White, however, may be as well known for the spectacular way he died—shot in 1906 at a party held on the roof of the Madison Square Garden that he had designed—as he is for his marvelous buildings that grace numerous Atlantic Coast cities.

Skyscrapers were just emerging when this building was designed. Land in Detroit was not so dear that State Savings Bank had to have a large tall structure. Thus, White worked with this available land at West Fort and Shelby. As you notice, White divided the Fort Street face of this bank into three bays with large arches and Ionic pillars. A cornice runs across the top of this white marble building with a hipped roof hidden by a balustrade. The windows are in bronze. The interior also used much marble with Roman arch colonnades and bronze grill work. Above the entry way, you will see attractive statuary with figures depicting commerce and industry.

The consulting Detroit architect who carried out the design of Stanford White was John C. Donaldson. Born in Scotland in 1854, Donaldson’s parents migrated to Detroit when he was only two. He attended Detroit public schools then decided to become an architect. For his training, he first went to the Academy of Fine Arts in Munich, then to the École des Beaux Arts in Paris and then on to Venice for additional training. After returning to Detroit, John Donaldson established a firm, in 1878, with Henry Brush who, along with George Mason, designed the frequently described Ransom Gillis Home. However, Brush died in 1879. Donaldson then formed a firm with Henry J. Meier. For almost ninety years, this was one of Detroit’s most accomplished and productive architectural firms.

Perhaps on the basis of his accomplishments with this State Savings Bank building, John Donaldson obtained the commission to design the first of the three Penobscot Buildings—the 13-story office tower at 131 West Fort that was completed in 1906. This structure is to the immediate left of the State Savings Bank Building.

The State Savings Bank merged with the People’s Savings Bank in 1907 to form the People’s State Savings Bank. They also needed more space, so in 1913, they turned to John Donaldson and Henry Meier to design the large rear addition along Shelby. That edifice was built on grounds then occupied by St. Paul’s Episcopal Church—a building designed by Calvin N. Otis in 1852. That church was taken apart and then reassembled at the corner of East Grand Boulevard and East Lafayette where it is still home to an Episcopalian parish now known at Church of the Messiah.

Along with most other Michigan banks, the People’s State Savings Bank failed in 1933. The building was subsequently used by a bank funded in large part by Henry Ford and the Ford Motor Company, Manufacturers’ National Bank of Detroit. In 1977, Manufacturer’s National moved out of this building and then, in 1992, Manufacturer’s merged with Comerica. In 1980, Silvers, an office equipment firm, moved into the State Savings Bank Building. After they moved out the building was used for a variety of purposes and, in 2010, I think the building provides office space for Detroit non-profits.