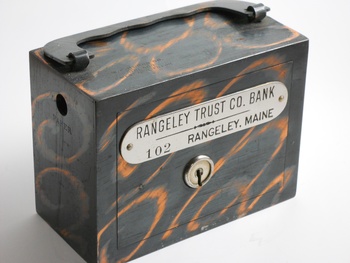 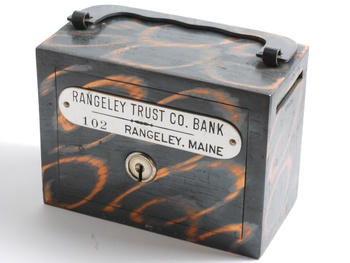 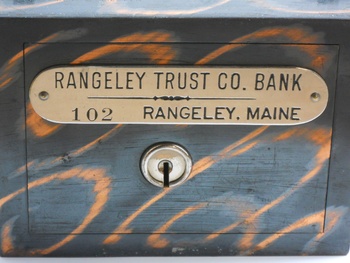 Good Evening CW Members----12:45 AM)2016-5-3
This for sure is my fav maker, W.F.Burns Company from Chicago and New-York and the one I know much about it, this particular one was promoted by "The Rangeley Trust Co.Bank, Rangeley, Maine, patent applied for, serial#105 on the front ID plate, the condition of this one is immaculate.

Mainly all my collection of advertising bank are centred on this amazing business man, THE inventor of "The Home Saving Bank System", Walter Francis Burns, this decor is the typical one to and for sure the common one, swirly red copper, electro plate on a dark background, but over the years and many hundred bank later, I discover many different decor, in some case I found only one of it and this observation, i will share with you in the current.
On this particular shape(square) we see 3 different way to ID the age, everything can be found by looking closely the front plate, the rivet and the steel bank itself.
1-In all case the engraving are on the left side of the top box, with the dating at 15 January 1895- the serial should be on the right side(nothing on the front ID plate), just the bank name, street, city, state, etc

2-The box engraving 1 January 1901, have also the serial on the right side(nothing on the front ID plate), just the bank name, city, state, street, etc

3-The box engraving Patent applied for, would't not having any serial on the right side, this time the serial should be on the front ID plate, on the left side, followed by the city and the state.

The Rangeley Trust Company Building is a historic former bank building at 60 Main Street in the center of Rangeley, Maine. It now houses the Rangeley Lakes Region Historical Society Museum. It is a single story brick Classical Revival building, designed by William R. Miller and built in 1905-06. It was Rangeley's first brick commercial building, and housed its first bank. From 1922 to 1979 it served as Rangeley's town hall. It was listed on the National Register of Historic Places in 1989.

The Rangeley Trust Company Building stands facing roughly east on the west side of Main Street (Maine State Route 4) in the center of Rangeley village. It is a small single-story brick structure, three bays wide, with a flat roof and a concrete foundation. The entrance is in the center bay topped by a dentillated pediment. It is flanked by plate glass windows topped by transom windows, which are framed by brick pilasters. The facade is topped by a broad entablature and wooden cornice, with a low brick parapet above. The main space in the interior, originally the bank lobby and teller area, is finished with tongue-and-groove wainscoting. Toward the rear of the building there is a vault, the office of the bank president, and stairs leading to the basement. The basement has a small metal jail cell located beneath the vault.

The town of Rangeley was established in 1860, but experienced significant growth in the late 19th century with the advent of outdoor vacation activity spurred by the adjacent Rangeley Lake's reputation as a fishing locale. The Rangeley Trust Company was founded in 1905 by Harry Furbish, a local businessman active in both lumbering and insurance, as a vehicle to finance the area's economic development. Furbish retained Lewiston architect William R. Miller to design this Classical Revival building, which opened for business in 1906. Furbish operated his businesses out this building until 1922, when the bank moved to larger quarters. It was then converted for use as town hall (around which time the basement jail cell was added). In 1979 the town gave the building to the local historical society, which now uses it as its headquarters and museum.