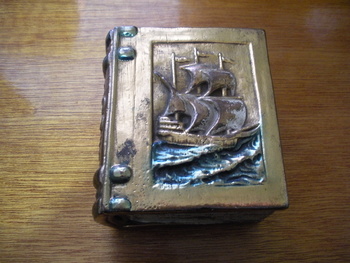 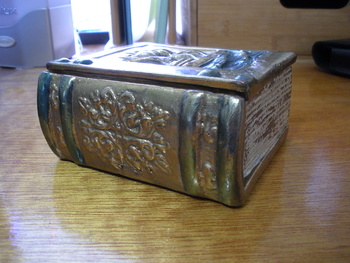 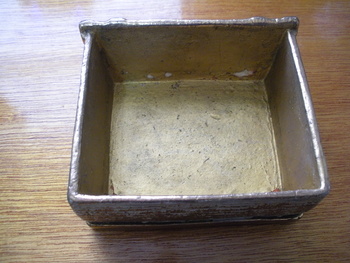 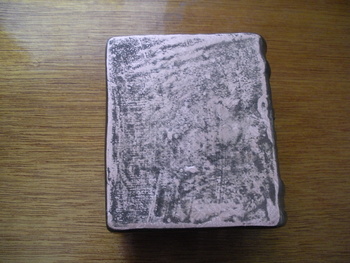 I purchased this item from an eBay seller recently, and today I set about to clean it up and put it on display. I had already soaked and scraped a bit at the back, which had an ugly, worn, beige piece of fel, glued on with what looked like mucilage. The seller hadn't really had much to say about it, and some of that was wrong, anyway. I believed it to be ceramic, cold painted, and fairly old. Now, I'm not sure what to think. It measures 4 7/16" T, 4" W, and 2 3/8" Thick. It's painted with metallic gold, metallic green, and white paint. A large percentage of the white paint is gone. The gold and green, however, are pretty much intact, and remind me of the finish on old German glass Christmas ornaments. Inside the lid it says "SHIP", with a curvy flourish before and after the word. There are no other markings. Magnets do not stick to it. When you tap the lid with a table knife, it makes a dull sound. When you tap the box part, it makes a metallic sound, or maybe a ceramic sound. Inside the box, which had been used to hold crayons at one time, there are 7 chipped places; the only places except the bottom where there is no gold paint. Apparently, there is a red paint-like layer under the gold paint, and under that, it is white. I thought it might be resin, or plaster. I poked it with a knife (it's pretty soft), and got a few bits on the knife blade, and heated them with a lighter. They didn't seem to do anything. I noticed that on the spine of the book, at the back edge of the central design, there are 2 tiny, golden, metal (I think) pegs that stick out less than 1/16". By this time, I was pretty mystified, but then I started to clean the mucilage off the back, and decided to put it on CW. The back was apparently the only part not painted gold. The back appears to be copper or bronze. I have bronze boxes about this size, and the weight is not too dissimilar. It was covered with something like brown paint, which came off a bit as I was scraping, and showed the copper underneath. The brown stuff is hard to get off. The copper surface shows fine parallel grooves from left to right, and concentric arcs from top to bottom, like it was sawn. I just now tried polishing the back with Maas metal polish. It did polish up considerably, but only with hard effort. The dark areas on the back are not coming off as easily as copper tarnish would. Okay, that's about all I know. I would be grateful for any clues to my Mystery Box! 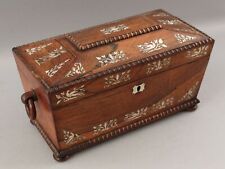 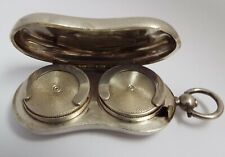 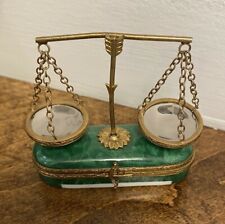 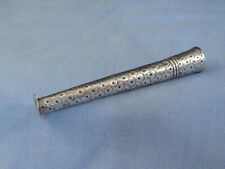