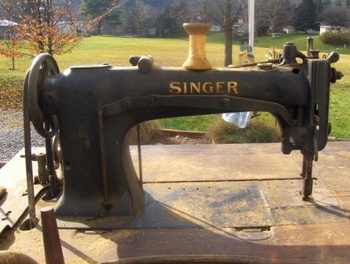 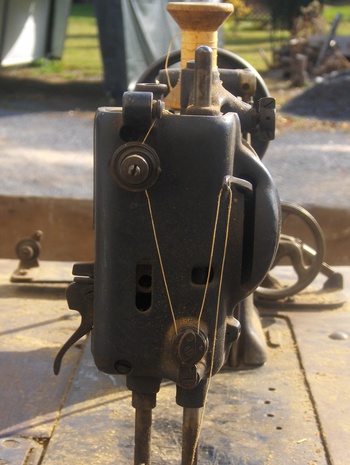 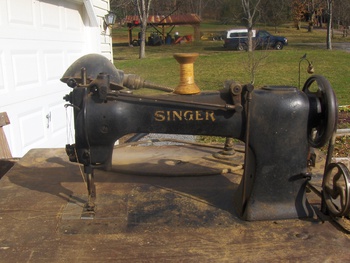 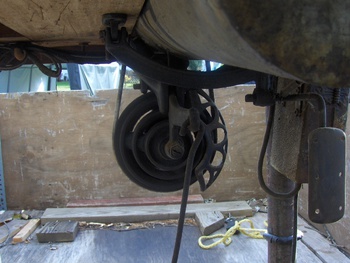 I was given this Singer 21W 180 compound needle feed sewing machine to do some heavy work a few years back. The machine had been used to sew automobile upholstery in Detroit back in the 20's and 30's. Prior to these pictures, it spent 35 years in the back room of a hardware store. It still works fine! Luckily the original needle is a size 23 with a chisel tip. Sort of looks like a finish nail a carpenter might use!

The sewing machine needed a new 1/2 HP electric motor, wiring and a switch, new drive belts, a new rotary hook and a thread tensioner. I found Keystone Sewing machine Company in Philadelphia to be a wonderful source of parts for this old industrial sewing machine. The owner is a real sluth when it comes to finding obsolete industrial machine parts.

I was able to find a pdf file, on Singer's web site, for the owners manual, mechanic's set-up and adjustment instructions, as well as a parts break-down. The Smithsonian Institution's web catalog had a brochure that advertised this particular machine as being used to sew canvas military equipment for WWI. Singer doesn't have any records concerning this machine.

Based on my research the machine was manufactured in the old Wheeler & Wilson factory in Bridgeport Conn. Singer bought out the complete W&W line around the turn of the century and started selling them as Singers. The old electrical motor switch had a 1910 penny lodged under one of the 20 amp screw-in fuses. That date is close to the time the machine was manufactured.

I am pretty sure the cast iron clutch is original to the sewing machine. It would appear the clutch was ment to be used with an industrial line-shaft. I believe the electric motor (Gilespie Electric Motor Co) was added later on. The table top is 1 1/2 inch thick chestnut with plenty of wear marks.

The feed mechinisim is what makes this sewing machine so unique. The feed dogs work just like any basic sewing machine but the needle also assists in pulling the material through at the same time. The stiches are perfectly formed even at 800 plus stiches per minute! There is no reverse on this machine.

I have never seen actual photographs of this particular machine anywhere else in my research. I was able to see one a on some sewing machine graveyard's web site. That machine appeared to be missing the needle feed mechinisim.