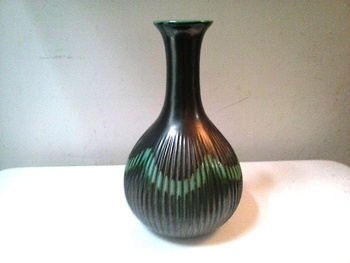 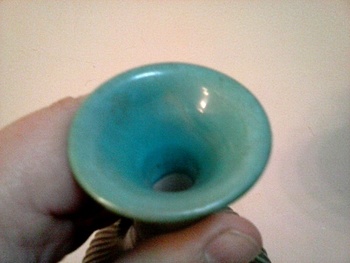 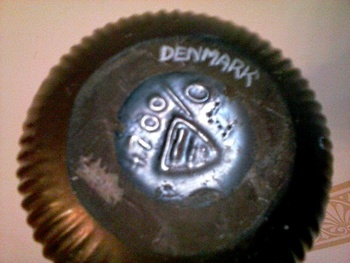 Found this little Danish gem at Volunteer's of America this morning. Hiding among the bric-a-brac in the house wares aisle. I figured it was something special when I turn it over and saw all the marks. The finish, design and turquoise colors are beautiful. It didn't take long to find out it's a Michael Andersen piece for Bornholm Keramik Denmark. It carries his three fish (herring) within a shield mark and a form number. Not sure about the date. I'd guess 50's or so. It's in perfect condition and has a bit of value too. -Mike-

Founded in 1890 by Jens Michael Andersen (1859-1931) who trained at the Hjorth pottery, on the Danish island of Bornholm in the Baltic Sea. Production in the early days was mainly utilitarian, but developed a range of items including statues, decorative vases and majolica. Jens' son Daniel Folkmann Andersen (1885-1959) took over the running of the company with his brother Michael, developing glazes, designs and a range of animal figures. In 1961 the grandson of Jens Andersen, Sven Michael, joined the firm. The company developed an art pottery production, which was very successful. This was led by Marianne Starck, a German artist, who had trained in Hamburg.
Since 1930 items have usually been marked with the three fish stamp. This is also the official seal of the town of Ronne, where the factory was located. It was an important port for herring fishing. There are also sometimes, form numbers and artists signatures.