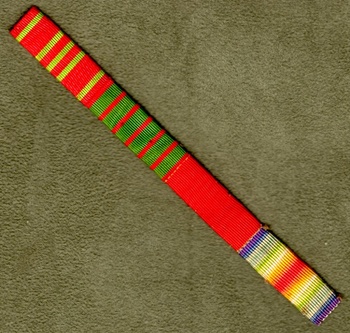 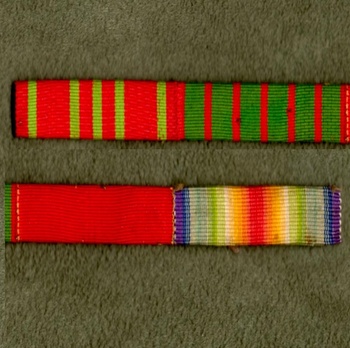 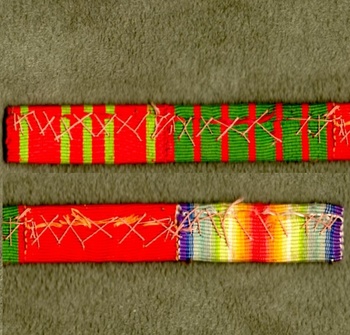 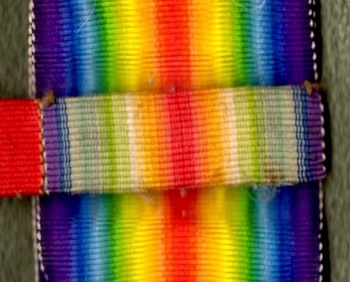 This is a typically constructed WWI ribbon bar for a well decorated veteran. Reading left from right, the veteran would have been Belgian, and has been awarded the Belgian Croix de Guerre. The French Croix de Guerre is in second place as a medal awarded by an ally. It has a couple pin holes that likely attached a palm, indicating mention at Army level.

Now here’s the interesting part – the red ribbon. The most likely identification in my opinion is the French Legion of Honor, but I would think it would be in second place on a Belgian ribbon bar, as it would be the highest foreign decoration. If this is a French ribbon bar, it would certainly hold the first place. The closest thing I can find that’s Belgian is the Order of Leopold – also higher than the Croix de Guerre.

The last ribbon is for the WWI Victory Medal. As a service ribbon it would be at the end - BUT - flip it over and it could be for an American veteran whose only valor awards were foreign (I would expect a British/Commonwealth Veteran to also have the British War Medal Ribbon that was paired with the victory).

But wait! There's more! The victory medal ribbon is not a match for the French, Belgian, American or British official ribbons. By agreement the ribbon for all the allied victory medals was to be the same, but there were minor variations in manufacture. Picture 4 shows it laid over a French ribbon. Note the narrower blue lines and lack of blending. The closest match I can find is Italian! Another possibility I am considering is Czech, because France did have a Czech Legion.

Comments and ideas folks? Other than that I’ve spent way too much time and energy here?