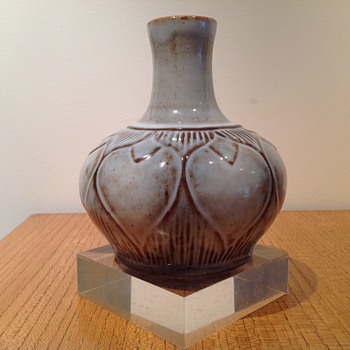 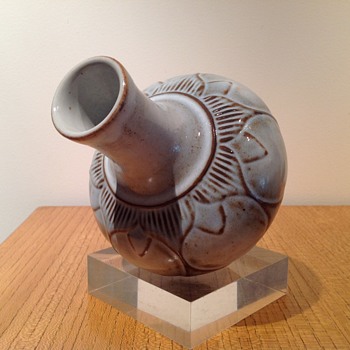 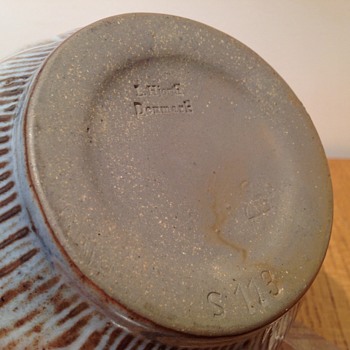 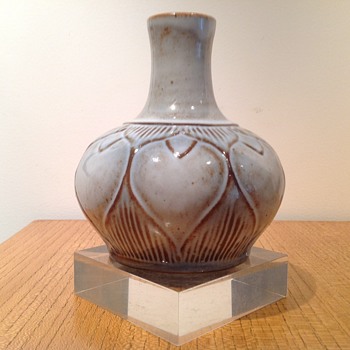 At the Wenty Collectibles Fair on the first of this month I saw this little vase and was surprised to see the Hjorth mark. For the life of me I thought it was Asian at first glance. At home I saw some others on the net that are linked to Eva Sjögren.

I knew nothing of Eva Sjögren. On the net I did some research and unfortunately came up with the wrong person. Thanks to KarstenJensen I have to correct that wrong and do a bit more research on the mysterious Eva Sjögren. KarstenJensen mentions below that she was born in Stockholm in 1925. Daughter of Dr. Gunnar Sjögren, a businessman who retired early and became expert in Shakespeare. Her mother was an author of short plays. She worked for Kähler in Næstved 1949 - 1950 and then worked for L. Hjorth i Rønne 1950 - 1951. She stopped working with ceramics and moved to England, where she married Sir David Wilson, and she has since then been known as Lady Wilson." (KarstenJensen)
It seems she had met David Wilson in Sweden when he was a student there at the Lund University. They married in 1955. He went on to be come Director of the British Museum from 1977 to 1992. Sir David is a distinguished Anglo-Saxon and Viking scholar. He was an Assistant Keeper at the Museum, 1954–1964 and then moved to the University of London where he became Professor of Medieval Archaeology and Head of the Department of Scandinavian Studies, before returning to the British Museum as Director. It seems they now live on the Isle of Man. Eva's career in pottery may have ended early but she is also the author of a series of books devoted to design including "8000 Years Of Ornament : An Illustrated History Of Motifs", "Early Medieval Designs From Britain For Artists And Craftspeople " and interestingly "North American Indian Designs For Artists and Craftspeople" and many more all under the name of Eva Wilson.

The Danish Hjorth firm goes back to 1859 and continues today under the direction of a fourth generation.