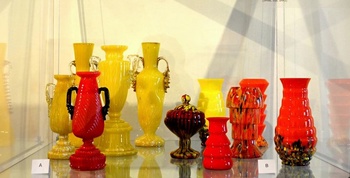 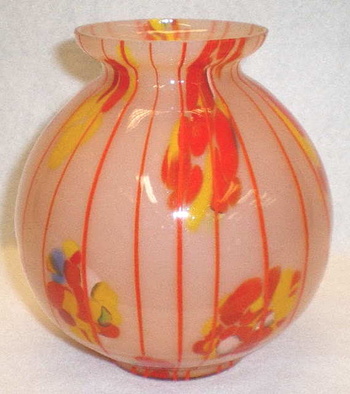 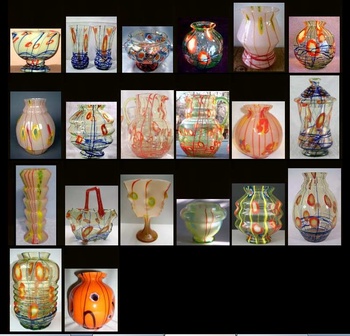 Although this post will discuss a glass exhibition specifically, the same general concept applies to books as well.

Many collecting glass, whether it be Czech or other types, often fall prey to the trap that museums and books tell the truth, and nothing but the truth…... and that is simply not true. In the world of Czech glass in particular, this is shown over and over again to be untrue. If one sees information in a book or presented by a museum, and is then presented with contradicting evidence, the decision must be made as to which information is more believable, more current, and more reliable.

In researching Welz production I often found that in order to confirm an attribution it is necessary to look for confirmation using several paths…. Different shapes and different decors to get to the same answer… and through that I found answers that hold up to critical scrutiny… In other words, I could be sure that my findings were correct.
Something seen in some instances in the exhibition as it travelled was that some pieces appeared to change cases… not a lot of pieces, but some, and seemingly indicating that opinions regarding them may have changed during the tour.

So the purpose of this exercise is to look at an exhibition attribution and see what we think of it.

The exhibit this example will come from is the Tango Exhibit of 2011-12 which toured in the Czech Republic. It was really the first of it's kind, and in some ways completely changed our perception of the term Tango and what it means in the world of Czech glass.

Image 1 above shows a case in the exhibition displaying Welz production on the left, and some items described as being by Franz Tomschick from Kostany on the right. The Welz examples in the case, all appear to be correct. The accuracy of the Tomschick attributions overall is not something I can attest to being correct or incorrect. I can say that there are very few references to the company, and even less known research. I can say that there is a vase in the case which I would consider to be an aberration.

What is visible in the case is an example of a shape which is quite commonly seen in the US market with an arched mark associated with Kralik production. It is the back right example in image 1. Unfortunately for European collectors, pieces in Europe were generally not required to be marked. So let’s look at what we can see.

If one is to believe a museum without question, then the vase is Tomschick in origins, and there is no need to look further. Having researched Kralik production among many others for a substantial period of time, I was aware that this particular shape was not only seen in several decors linked to Kralik, but commonly seen with the arched mark.

So let’s look at the vase in image 2. This vase is a marked example bearing the arched Kralik provenance mark. This example was in my collection at one point. The shape is seen in a wide variety of Kralik decors, and the décor is seen on other marked Kralik forms. It is found most commonly in an ivory ground, and also in a light Vaseline ground. The décor is referred to as “Lines & Canes”. Image 3 shows a page from Kralik-glass.com with examples of the décor on various shapes.

Interesting to note in the image is the first vase in the third row. Having had first hand experience with this example, I know that this example was also marked with the arched Kralik provenance mark. So what we seem to have here is an example of where the Tango exhibition seems to have incorrectly identified a piece of production. In this instance, it would seem that if we followed the lead of the exhibition, the resulting reassignments of decors to Franz Tomschick would likely be massive.

So if we now look at the Kralik vase, a vase I call the Zig-Zag, we can identify another décor by Kralik on the same shape. Seen in image 4, This blue spatter is a décor also found on a shorter version of the same form. In this case we do not determine it to be the same décor because it shares a couple of colors, but because it shares all of the same colors and also shares a design aesthetic. A shorter Zig-Zag form.

This idea is one I am discussing to demonstrate that research, in my humble opinion, is a methodology which requires multiple steps of confirmation at every bend. The quick use of a shape with an attribution jump to a similar décor can easily lead one to wrong conclusions.

My website has a large number of identified décors for several glass houses, and my working archives contain at least as many that I am currently working to confirm or exclude. This is the nature of the research when unaided by documentation.

Unsupportable research generally results in erroneous conclusions…. Eventually the truth will surface, but the long term ramifications of that can be destructive to a collectors knowledge. If you want an example of that, simply Google “Powolny Tango Loetz” and look at images. The vast majority of what will be seen is not Loetz, and was not designed by Michael Powolny, and yet a bad piece of published research lives on almost 20 years later…… And that is why I have such an extreme aversion to it.

My mom used to always tell me, "If it walks like a duck, swims like a duck, and quacks like a duck, it is a duck." As a researcher I find it necessary to wonder if it actually is a duck….. The obvious is sometimes not really the answer… Is it a duck…. or something else just seeming that way?

Supportable Research - a methodical process, which in many cases ignores what seems so easily and readily obvious, and looks for the actual facts instead…. Sometimes the facts are the obvious, and sometimes they are not….. but as mom used to also say… Better Safe than Sorry!

And in my humble opinion, this concept applies whether one is a new collector, an experienced collector, or a seasoned researcher. Always question what you think you are learning and seeing…. The worst it can do is cause you to have a better understanding of the subject if it interests you. You can't learn too much!!